ZOE SALDANA IN “THE BOOK OF LIFE”


From visionary filmmaker Jorge Gutierrez whose unique visual style and vibrant storytelling technique, “The Book of Life” tells the story of three best friends - Manolo and his equally courageous best friend Joaquin are not your typical Prince Charmings; the object of their affections is far from being your average princess, hence “The Book of Life” is a fairy tale that doesn’t go by the book. 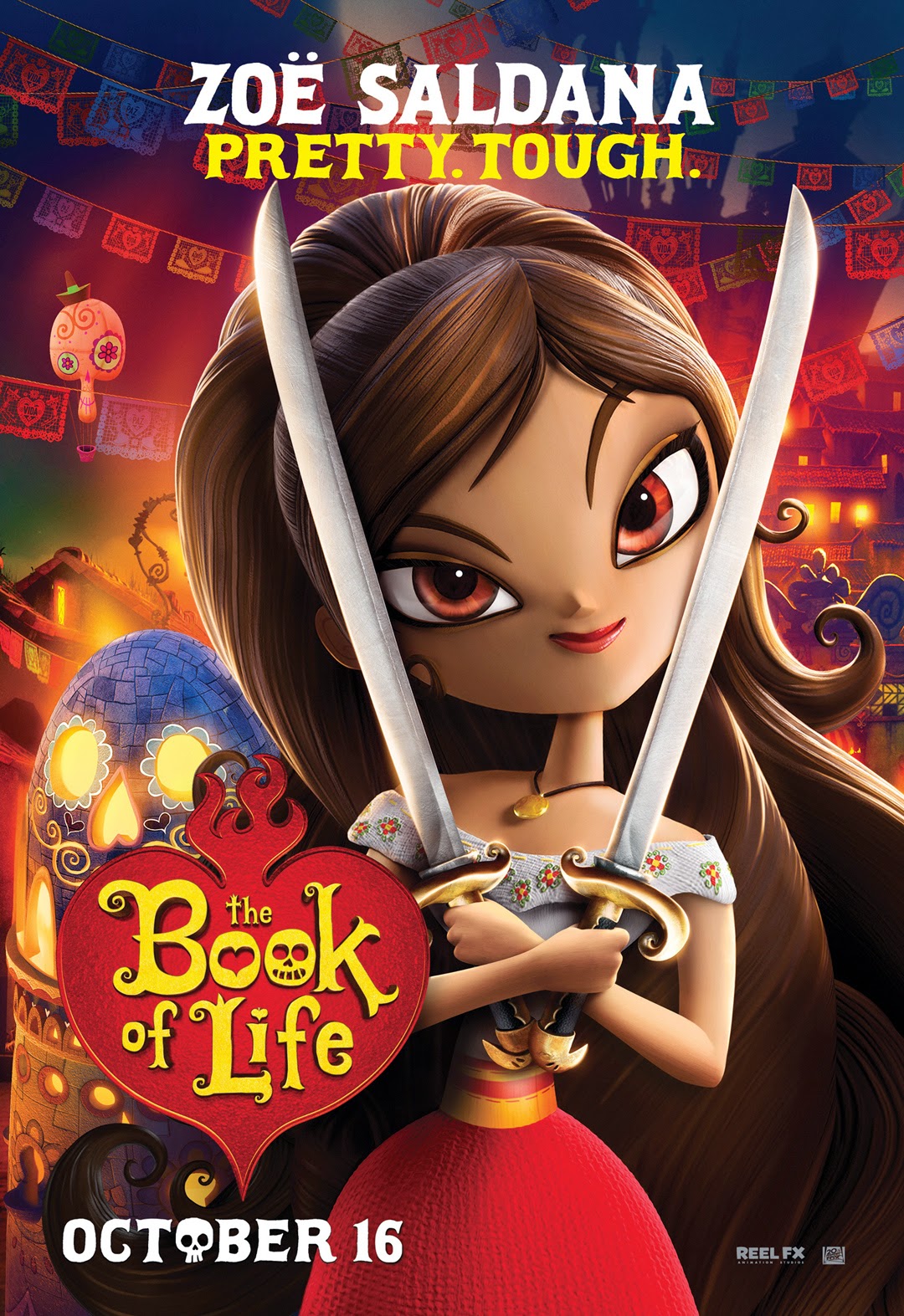 Our story begins in a museum, where we meet a mysterious tour guide named Mary Beth, who is taken on the seemingly thankless task of guiding a group of rowdy kids who would rather be anywhere else, on a tour.  But Mary Beth has something special in store for them, and escorts them into a secret room, where the magic of “The Book of Life” begins to unfold.  “This particular area of the museum looks like Latin America basically exploded into it, turning it into a place filled with life and color,” says Gutierrez.

Christina Applegate voices Mary Beth and introduces us to the principal characters and their hometown of San Angel. We meet Manolo (voiced by Diego Luna), who is torn between fulfilling the expectations of his family and following his heart.  Before choosing which path to follow, Manolo embarks upon an incredible adventure that spans three fantastical worlds, where he must face his greatest fears. The object of Manolo’s affections, Maria, voiced by Zoë Saldana, is an independent, strong-willed and fun-loving young woman who is wooed by her best friends Manolo and Joaquin (Channing Tatum), from their time as children to a reunion years later as adults.

She’s certainly not your average “princess,” and is equal –or superior – to her suitors in any number of ways.
Maria is close to both boys, but perhaps the wistful Manolo is her true soul mate.  “Even when they were kids, Maria had a soft spot for Manolo,” says Saldana.  “She understands and feels a connection to his sensitive nature.  I guess deep down, Maria is an artist and a philosopher.”

And, maybe, she’s a songstress, too?  At the very least, Saldana loved the idea of singing in the film, especially when she learned that Luna would be singing as Manolo. “At first, I wasn’t sure Jorge would take my request to sing very seriously.  And then, they told me, ‘Well, there’s this beautiful song, ‘No Matter Where You Are,’ and we want you to be a part of it.’  And I had a really great time with the song.”

Manolo, Maria and Joaquin – three best friends – have been close since childhood.  Their bond was interrupted when Maria, who was a bit too rebellious for her father’s taste, was sent to Europe to become a proper lady.  Joaquin joined the military academy and became a legendary bandit-fighter.  But Manolo didn’t go anywhere – he stayed in San Angel and practiced to become a bullfighter, as his father did before him, and his father before him.

“But even after this long absence, Maria discovers that Manolo and Joaquin haven’t changed a bit,” says Saldana. “They’re still fighting for Maria’s attention, but she’s her own woman, who is going to make that decision – and many others – on her own.  She doesn’t consider herself a prize that’s going to be won by one of these great guys.”
Indeed, love has to wait; first Maria must make some tough decisions, sprint into action to defend her town from marauding bandits, and tend to her four-legged best friend, Chuy, a pig gifted to her by Manolo. A loyal and protective pet, Chuy weighs in at over 300 pounds, sounds like a goat and acts like a puppy.
Posted by LENS Blogger at 1:51 PM

Email ThisBlogThis!Share to TwitterShare to FacebookShare to Pinterest
Labels: the book of life, zoe saldana