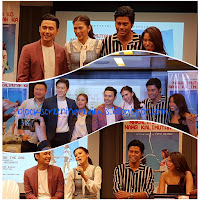 For the WillBros, taking on the movie business is something new and they plan to show rom-com movies because rom-com is the most watched genre in Philippine cinema especially in mainstream. Unlike any mainstream movie, it also elevates independent movie actor and thespian Jerald Napoles to a supporting character in the story.

For first time director Fifth Solomon, he already eyed Alex as the main character of the movie when he first wrote it and he was glad that she agreed. The WillBros also plan to join any movie festival when they got a material.