Ang Larawan gets a unanimous “A” from the Cinema Evaluation Board


“Ang Larawan,” the lone musical entry in this year’s Metro Manila Film Festival, has gotten a grade of “A” from the Cinema Evaluation Board (CEB).
The musical written by National Artist for Theater Rolando Tinio and composed by Ryan Cayabyab is the only film this year wherein all CEB eleven members who previewed gave the highest grade. The CEB summation stated, “It is seldom and rare that the members of the Board give a unanimous A to a film.“

Based on the play A Portrait of the Artist as Filipino by National Artist for Literature Nick Joaquin, “Ang Larawan” tells of how financially troubled Marasigan sisters Candida and Paula hold on to their father’s masterpiece in spite of great interest and attractive offers from potential buyers.

The CEB praised the various aspects of production with one member citing that the movie is “enthralling, captivating and beautifully helmed!” The board described the performances by the leads and supports as “excellent.” Another member reiterated that, “’Larawan’ is a brilliant, fabulous production with great acting and excellent technical elements.”

As soon as CEB grade was released, the filmmakers took to social media to express their gratitude and joy. “Wow! What a blessing!” said Rachel Alejandro; while Celeste Legaspi declared, “Very proud!”  Joanna, who is touring as part of the international production of “Cats,” wrote on Facebook, “All the hard work is paying off.”

“Ang Larawan” is Joanna’s first starring role in a film and she began preparing for it way back in 2014.

The CEB recognition is the latest of a string of accolades that “Ang Larawan” has been receiving ever since its world premiere at the Tokyo International Film Festival last October. Variety’s Richard Kuipers said, “This musical adaptation of a beloved Filipino play is a class act.” Local press and writers who have watched the film at an advanced preview are predicting “Ang Larawan” will be embraced by music-loving moviegoers and will be a strong contender for MMFF awards.

The film has also gotten endorsements from the Commission on Higher Education (CHED), the National Commission for Culture and the Arts (NCCA), Senator Bam Aquino, Congresswoman Pia Cayetano, and Batangas Governor Hermilando Mandanas.

Noting that “Ang Larawan” is a period movie, not a formula film, and that the musical genre remains untested, the CEB commended Culturtain Musicat Productions for taking a risk. “So, kudos, congrats, and thanks to the brave, intrepid band of producers and their fearless funders for this film. May their tribe increase and may this movie reach as wide an audience as possible.” Furthermore, the CEB made a clear call to the moviegoers “to see this film and spread the good word: go out and see Filipino films!”

For updates and information, check out anglarawan.com and facebook.com/AngLarawanTheMovie/
Posted by LENS Blogger at 12:00 AM No comments:

“STAR WARS: THE LAST JEDI” FIRST SCREENINGS ON DEC 13 TO START AT 5PM

MANILA, Dec. 11, 2017 – Opening three days earlier than in the US, Lucasfilm’s Star Wars: The Last Jedi begins its roll-out in Philippine cinemas on Wednesday, Dec. 13 with screenings starting at 5 in the afternoon.

Fans are encouraged to buy their tickets in now at their favorite theaters to avoid missing out to be one of the first in the world to watch the eagerly anticipated sequel to Star Wars: The Force Awakens.

Meanwhile, Lucasfilm has released two featurettes to let fans in on the secrets behind the production.

The featurette “The World of The Last Jedi” explores the real-world locations behind the new planets in the story, and may be viewed athttp://youtu.be/zIauywtvcjI.

The second featurette, “Training Montage” shows how the cast prepared for their very physical roles. Watch at http://youtu.be/-py2awmME8s.

In Lucasfilm’s Star Wars: The Last Jedi, the Skywalker saga continues as the heroes of The Force Awakens join the galactic legends in an epic adventure that unlocks age-old mysteries of the Force and shocking revelations of the past.

Bossing Is Back with multi-generation cast in Meant To Beh

After one year of absence in last year’s MMFF, the Bossing Vic Sotto is back in the MMFF bandwagon. Not as Enteng Kabisote but with something different. “The Metro Manila Film Fest is meant for the family”, says Sotto; “it is the only time of the year were we are with our families.” “So, I am making something different by doing something family oriented.”
Joining Bossing is the multi-generation of casts like JC Santos, Sue Ramirez, Daniel Matsunaga, Andrea Torres, Gabbi Garcia, Ruru Madrid and making his movie debut is the cute TV sensation Baste. Reuniting with Vic Sotto after 20 years is Dawn Zulueta. Bossing and Dawn last worked together in an OK Ka Fairy Ko movie.

Besides Dawn and Bossing, the only supporting cast present was JC Santos, whom I saw transcend from his career in theater to mainstream entertainment. For Vic Sotto, it was also a humbling experience. Knowing that the younger cast members are also professional and he also learned from them. Dawn also said that it was also their task to make themselves an example to cast members so there won’t be barriers between them in any way. JC felt honored when he said, “So this is what is like to work with Bossing.” Vic Sotto adds, “Baste is such a revelation that he will be big someday. Not just literally but also figuratively, he jokes.” He is also professional at his young age.

“Meant To Beh” is directed by Chris Martinez for OctoArts Films. It will run for the whole duration of the MMFF from Dec. 25, 2017 to January 7, 2018. For more movie blogcon coverage, follow this blog and like L.E.N.S. blogs on Facebook.
Posted by LENS Blogger at 9:16 PM No comments:

Sinesaysay: A Movie Contest That Will Showcase Educational and Historical Context

Movies like Heneral Luna changed the way how audiences think and how our local movie industry produces movies. It trended and made an impact both positively and negatively in a constructive manner. 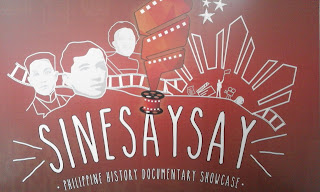 The Film Development Council of the Philippines partnered with the National Historical Commission to launch Sinesaysay, a movie contest that focuses on our history. The contest will be open for submission from December 2017 to February 2018.

What’s good about this contest is the winning entry will be given grant to create a full length movie and it will be shown in schools and general audiences for educational as well as entertainment purposes.

I met Mr. Alvin Alcid, Chief Historical Researcher of NHCP when Ballet Philippines produced Ibarra at Simoun. We need more movies like these to make us all more interested in history so our students won’t be as clueless about our local history like why Apolinario Mabini was seated all the time. More details on Manual To Lyf blog. For more updates, follow this blog and like L.E.N.S. blogs on Facebook.
Posted by LENS Blogger at 11:32 AM No comments: