“THE JUDGE” POSTER AND TEASER TRAILER 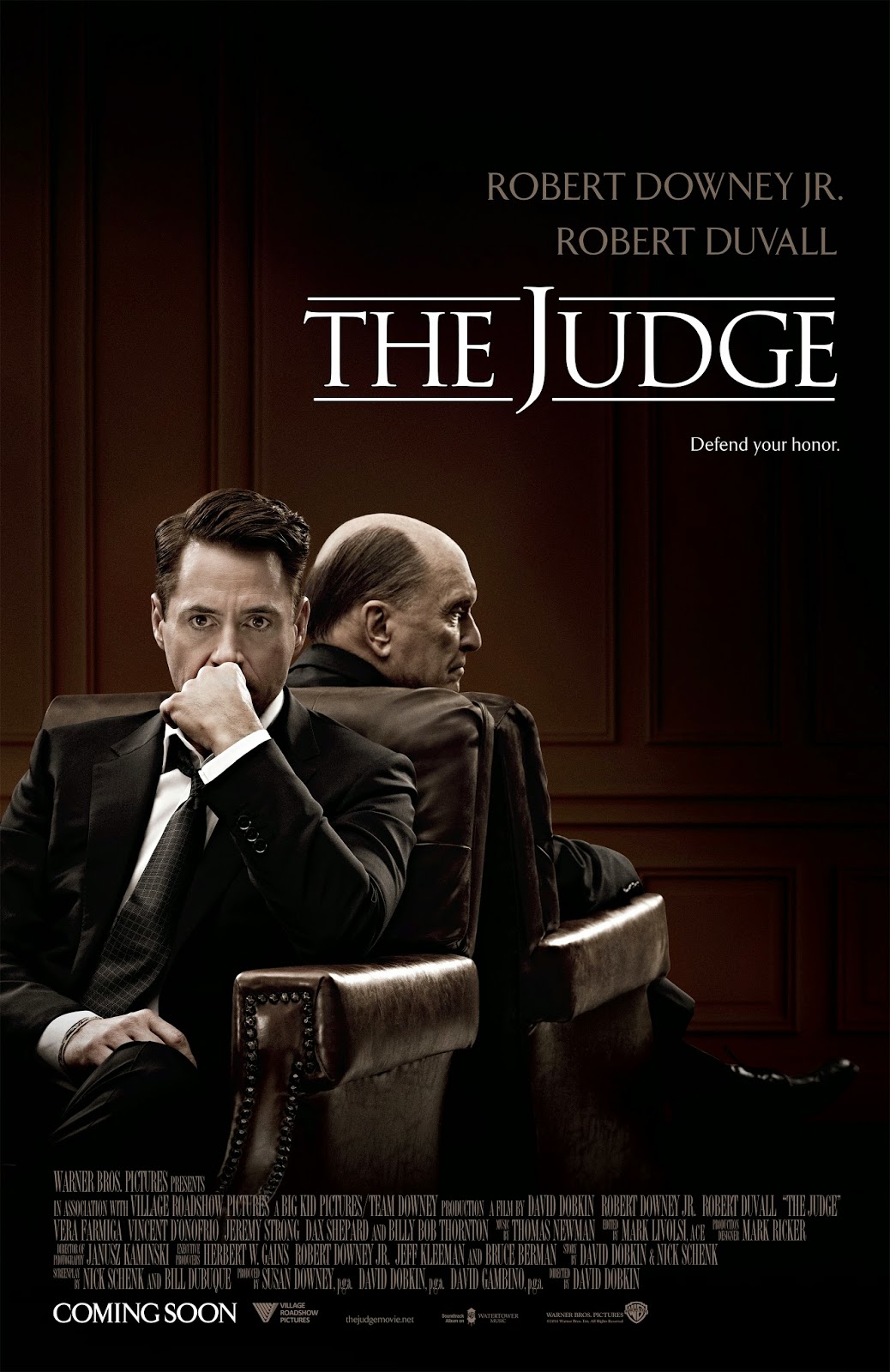 Directed by David Dobkin (“Wedding Crashers”), “The Judge” stars Downey as big city lawyer Hank Palmer, who returns to his childhood home where his estranged father, the town’s judge (Duvall), is suspected of murder. He sets out to discover the truth and along the way reconnects with the family he walked away from years before.

“The Judge” is being produced by Susan Downey (the “Sherlock Holmes” films), David Dobkin, and David Gambino (“The Brave One”), with Herbert W. Gains, Robert Downey Jr., Jeff Kleeman and Bruce Berman serving as executive producers. The screenplay is by Nick Schenk (“Gran Torino”) and Bill Dubuque, story by Dobkin & Schenk.

Opening across the Philippines on Oct. 22, 2014, “The Judge” is distributed by Warner Bros. Pictures, a Warner Bros. Entertainment Company.
Posted by LENS Blogger at 8:34 PM No comments:

Email ThisBlogThis!Share to TwitterShare to FacebookShare to Pinterest
Labels: the judge


Academy Award-nominee Mark Wahlberg (“The Fighter”) gets to show off his fatherly protective side in Paramount Pictures' “Transformers: Age of Extinction,” the fourth installment in director Michael Bay's summer blockbuster franchise.

Walhberg plays single dad Cade Yeager who the actor describes as "a very ordinary guy who has to do extraordinary things in the face of danger to protect his family — anyone can relate to that. It's a little more intense, but there are great moments of humor infused."

Fans can expect a lot of boom from the Michael Bay-directed film, which will introduce a new breed of Transformers — ancient aliens that transform into dinobots. "Michael is always pushing boundaries, but here we're creating new boundaries," Wahlberg says. "This is going to be a very cool ride."

“Transformers: Age of Extinction” begins after an epic battle left a great city torn, but with the world saved. As humanity picks up the pieces, a shadowy group reveals itself in an attempt to control the direction of history…while an ancient, powerful new menace sets Earth in its crosshairs.

With help from a new cast of humans (led by Wahlberg), Optimus Prime and the Autobots rise to meet their most fearsome challenge yet. In an incredible adventure, they are swept up in a war of good and evil, ultimately leading to a climactic battle across the world.
“Transformers: Age of Extinction,” the fourth film in director Michael Bay's global blockbuster franchise, stars Mark Wahlberg, Stanley Tucci, Kelsey Grammer, Nicola Peltz, Jack Reynor, Sophia Myles, Li Bingbing, Titus Welliver and T. J. Miller. Produced By Don Murphy & Tom DeSanto, Lorenzo Di Bonaventura and Ian Bryce. Based on Hasbro's Transformers™ Action Figures. Written By Ehren Kruger. Directed By Michael Bay.

Mark Wahlberg earned both Academy Award® and Golden Globe nominations for his standout work in the family boxing film “The Fighter“ and Martin Scorsese’s acclaimed drama “The Departed.“ Wahlberg has played diverse characters for visionary filmmakers such as David O. Russell, Tim Burton and Paul Thomas Anderson. His breakout role in “Boogie Nights“ established Wahlberg as one of Hollywood’s most sought-after talents.

Wahlberg’s remarkable film career began with “Renaissance Man,“ directed by Penny Marshall, and “The Basketball Diaries,“ with Leonardo DiCaprio, followed by a star turn opposite Reese Witherspoon in the thriller “Fear.“ He later headlined “Three Kings“ and “The Perfect Storm,“ with George Clooney, and “The Italian Job,“ with Charlize Theron. Wahlberg then starred in the football biopic “Invincible,“ with Greg Kinnear, and “Shooter,“ based on the best-selling novel Point of Impact. He reunited with “The Yards“ director James Gray and co-star Joaquin Phoenix in “We Own the Night,“ which he also produced. Other projects include “The Lovely Bones,“ “The Other Guys,“ “Contraband“ and “Ted.“ Most recently, he starred in Michael Bay’s “Pain & Gain“ with Dwayne Johnson, “2 Guns“ with Denzel Washington, and “Lone Survivor“ for director Peter Berg.

Now showing across the Philippines in IMAX 3D, Digital 3D and 2D cinemas, “Transformers: Age of Extinction” is distributed by United International Pictures through Columbia Pictures.
Posted by LENS Blogger at 8:18 PM No comments:

Gary Oldman in Dawn Of The Planet Of The Apes


Revolutionary duo - WETA Digital and Andy Serkis who gave us the groundbreaking effects of motion capture are back once again on the big screen in “Dawn of the Planet of the Apes.”  The previously released “Rise of the Planet of the Apes,” an arresting story, launched a new franchise and became a global hit  grossing nearly $500 million and receiving critical and audience acclaim.  It was the first live-action motion picture to star and be told from the point of view of a sentient animal Caesar-- a character with human qualities and with whom moviegoers experienced a real emotional bond.

In “Dawn of the Planet of the Apes,” Caesar’s principal human contact is Malcolm, portrayed by Jason Clarke. Malcolm is a former architect who lost his wife to the virus that wiped out most of humanity. Left on his own to raise his teenage son, Malcolm is desperate to maintain the hope and stability he and Alexander have found within a small colony of fellow survivors in San Francisco.

While Malcolm is a pivotal figure in the human colony, its leader is Dreyfus, played by Gary Oldman. Prior to the breakdown of society, Dreyfus was a law enforcement professional.  Now, he has taken on the role of a leader of the human colony surviving among the ruins of downtown San Francisco -- an authority figure intent on not only saving, but rebuilding what’s left of mankind a decade after the Simian Flu destroyed human-run infrastructure.  Oldman describes the colony as “a melting pot of survivors. The virus has just wiped out millions and millions of people. We are just the lucky few that were genetically predisposed to have been immune.  As a community we’ve come together and we’re trying to survive and restore our world.”

Oldman notes of his character, “I think he’s quite a heroic character. I guess you could call him the leader. Matt and I talked about what he may have done locally in the community — by locally I mean San Francisco. He was probably a policeman or something. So they are the sort of go-to people. He’s resourceful. He’s that sort of guy who is a designated leader. There’s no ego in that way. But he’s got very personal baggage that he carries. And not all things are relative. We went through the epidemic and then the subsequent rioting and post-apocalyptic chaos. Then if you survived the disease and then you’re immune to the disease and you survive the other stuff, I think why put that at risk? That’s where he’s coming from.”

Such realism is further enhanced by the production’s ability to shoot in exterior locations.  More than 85 percent of the movie was shot in the forests of Vancouver and outside New Orleans.  Serkis calls this a “huge technical leap that enables there to be no disconnect with the other actors.”

Addtionally, Oldman describes the movie’s technology as having leapt a hundredfold, “Well, he’s basically revolutionized the art form with this. What they’ve achieved in this movie is in its own way as miraculous as [the achievement of] Alfonso Cuaron with Gravity. What he’s done is he’s taken motion capture and 3D onto location. And then used natural light, one source directional lighting, long lenses, all the things that you would use on a regular movie or a more conventional movie or a not heavy-FX film and applied it to this. So he’s taken all those sort of old techniques and applied them to new technology. And I’ve seen a cut of the movie with people running around in grey uniforms and pixels hardly rendered, and even in this condition I was totally lost in the story. I think he’s done something very new here. And more than that, I said, “I can’t believe what I’m watching. I mean they look like real gorillas!” I don’t know what they did since the last movie, but the technology has come on a hundredfold.”

Born in New Cross, England but now living in California, Gary Oldman is one of the most prolific and impressive actors working in Hollywood today. A grounding in theatre during the ’70s primed him for breakout roles in ’80s British films Sid And Nancy (in which he played punk-music icon Sid Vicious) and Prick Up Your Ears (in which he played writer Joe Orton), and the acclaim he received for both these performances was widespread and resounding.  With over 20 years as a worldwide presence in major motion pictures, is also known to millions as Sirius Black (Harry Potter’s Godfather), Commissioner Jim Gordon (Batman’s crime-fighting partner), “Dracula,” “Beethoven,” “Lee Harvey Oswald,” “Joe Orton,” “Sid Vicious,” and also the terrorist who hijacked Harrison Ford’s Air Force One.  He also starred in Luc Besson’s “The Professional” and “The Fifth Element” and also as Dr. Zachary Smith in “Lost in Space.”
Highly regarded as one of foremost actors of his generation, and an internationally known, iconic figure, he has the distinction of appearing in more successful films than any other artist spanning the past twenty years, and additionally has appeared in more than one of the top ten highest grossing films in history including, not one, but both of the most successful film franchises in history. Mr. Oldman is the recipient of the 2011 Empire Icon Award, awarded for a lifetime of outstanding achievement.  He has appeared in the following Harry Potter films: “Harry Potter and the Prisoner of Azkaban,” “Harry Potter and the Goblet of Fire,” “Harry Potter and the Order of the Phoenix,” “Harry Potter and the Deathly Hallows: Part II;” and also appeared in “Batman Begins” and “The Dark Knight” and “The Dark Knight Rises.”

Prepare for war on July 9 when “Dawn of the Planet of the Apes” opens in almost 200 screens nationwide from 20th Century Fox to be distributed by Warner Bros.
Posted by LENS Blogger at 8:11 PM No comments:

Email ThisBlogThis!Share to TwitterShare to FacebookShare to Pinterest
Labels: dawn of the planet of the apes, gary oldman

WAHLBERG, CAST OF “TRANSFORMERS: AGE OF EXTINCTION” IN HK FOR WORLD PREMIERE

Hollywood descended in Hong Kong June 19 for the world premiere of Michael Bay's “Transformers: Age of Extinction,” the fourth installment of the mega-blockbuster franchise. 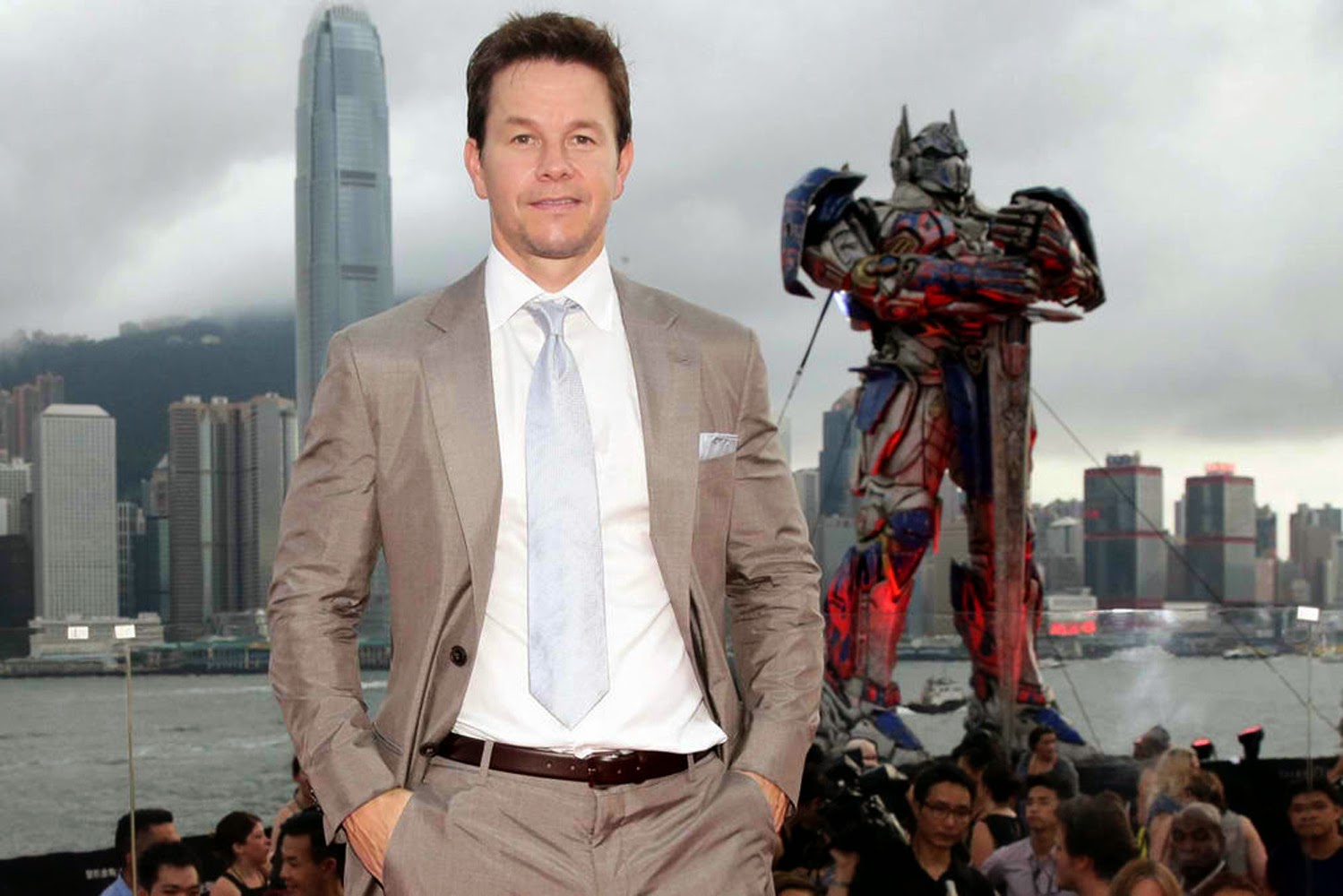 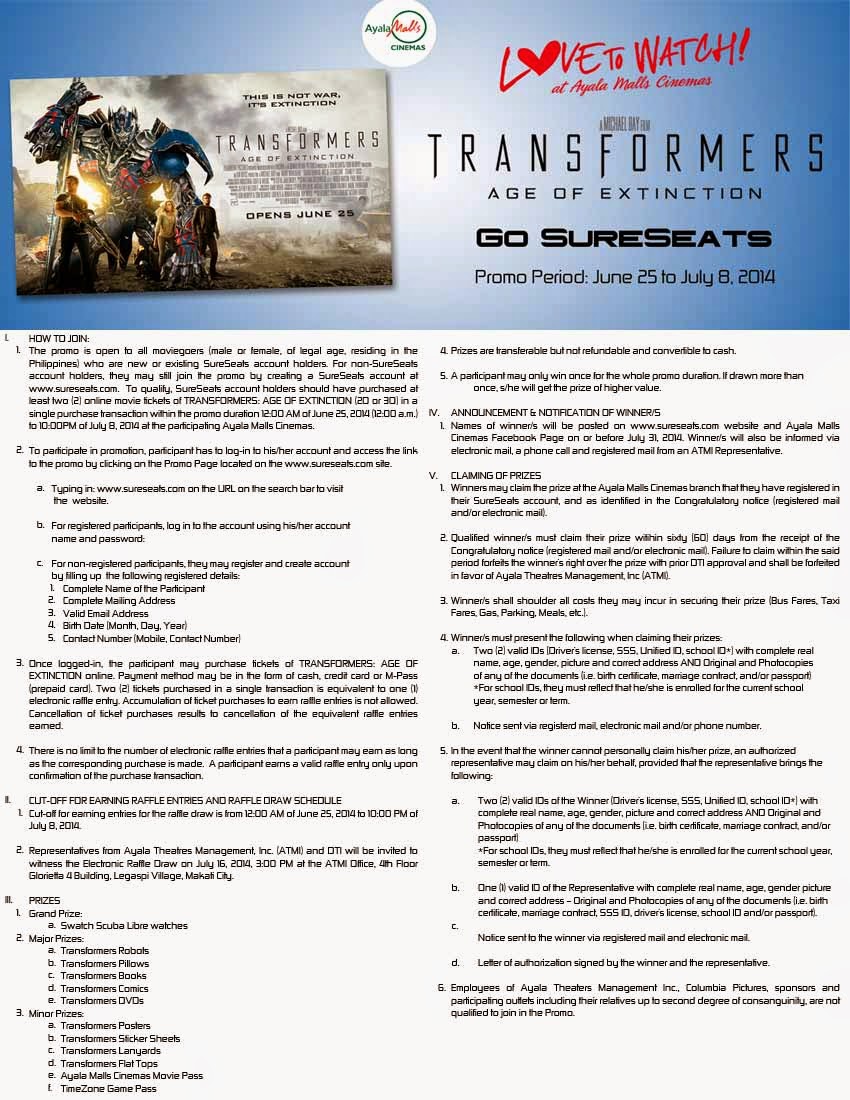 “Transformers: Age of Extinction” begins after an epic battle left a great city torn, but with the world saved. As humanity picks up the pieces, a shadowy group reveals itself in an attempt to control the direction of history…while an ancient, powerful new menace sets Earth in its crosshairs.

With help from a new cast of humans (led by Wahlberg), Optimus Prime and the Autobots rise to meet their most fearsome challenge yet. In an incredible adventure, they are swept up in a war of good and evil, ultimately leading to a climactic battle across the world.

Now showing across the Philippines in 3D, 2D, IMAX 3D and 4DX formats, “Transformers: Age of Extinction” is distributed by United International Pictures through Columbia Pictures.
Posted by LENS Blogger at 12:50 AM No comments:

Email ThisBlogThis!Share to TwitterShare to FacebookShare to Pinterest
Labels: transformers 4