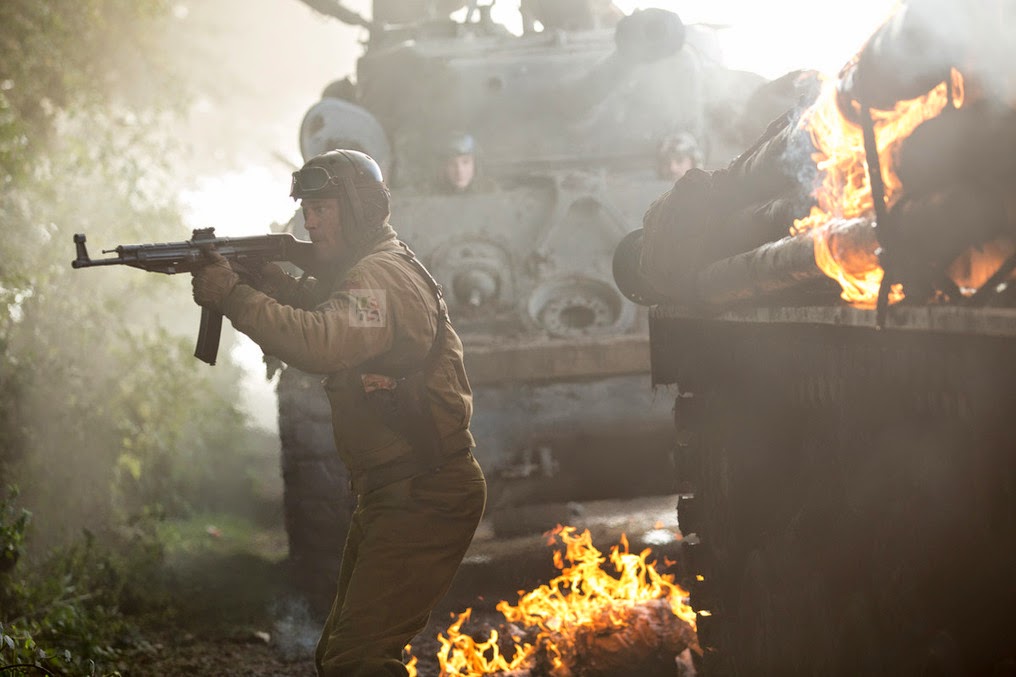 “Fury” puts together a winning cast along with Pitt, a squadron of fearless soldiers in a Sherman tank called Fury – Shia LaBeouf, Michael Pena, Jason Isaacs, Jon Bernthal and Logan Lerman.  The movie brings these American soldiers to German territory during the last days and bastion of World War II.

Rotten Tomatoes, worldwide online reference when it comes to movies reflects an 80% score among critics with an overall consensus that the movie is a well-acted, suitably raw depiction of the horrors of war that offers visceral battle scenes.
The intensity of the screenplay that "Fury" director David Ayer wrote for Fury has become his hallmark, but the movie, like his screenplays for Training Day, The Fast and theFurious, and other films, also demonstrates a deep connection between the characters.  “David’s movies are visceral and real, but they’re also deeply about brotherly love and friendship in the most extreme circumstances,” says producer Bill Block.

Details of the tankers’ memories come alive in Fury– for example, that every fifth bullet from the machine gun is a tracer; that there are so many tracers that the heat can melt the barrel; that the difference between outgoing and incoming artillery is the incoming’s telltale whistle; that the outgunned Sherman tanks could find ways to use their exceptional mobility against the Germans’ mighty Tiger tanks.  It’s these details that make the film feel true-to-life.

“Veteran accounts are hugely important, because they bring it to life,” says David Rae, one of the military technical advisors on the film.  “They give you the actual ground truth of how a crew fought through different theaters – through Normandy, North Africa, through the low countries, and finally to Germany, that final push.  They give you interesting stories that you can grab hold of and emotionally attach yourself to.”

There were five main tanks used for filming, all various models of the M4 Sherman tank: in the film, the tanks are nicknamed Fury, Matador, Lucy Sue, Old Phyllis, and Murder Inc.

To populate the tank crews, Dowdall says, “We thought that the best thing would be to use trained tank crews – not collectors, but guys who’d been to Afghanistan and other combat situations recently.  They could not only command the tanks properly, but think on their feet if something went wrong with one of these seventy-year-old vehicles.”   For the Fury herself, there were three main vehicles used by the production.  First, naturally, was a real tank, supplied by the Bovington Tank Museum, a late-war Sherman with a 76mm gun.

The tank – which was a rolling set that had to be dressed and maintained as a picture vehicle every day – also became a second home of sorts for the actors who portray its crew.  “When they had boot camp, they were taught to live outside;later, when Fury became available to them, we couldn’t really get them out of it,” says Tank Crew Supervisor Jim Dowdall.  “They put their own stamp on it.  They began to live and to eat inside it.  Between rehearsals, instead of getting off the tank, they just hunkered down inside and talked and lived like a tank crew would.  I think that shows in the movie – there’s a familiarity.”

Jon Bernthal – like all of the actors – became very attached to the Fury.  “They say it ain’t the size of the dog in a fight, it’s the size of the fight in the dog.  She’s a badass tank,” he says, describing the tank.  “She’s not the biggest, not the strongest – you should see the Tiger! – but she’s all heart.”

Adds Logan Lerman: “Seeing the tanks up and running, these seventy-year-old vehicles – it was a beautiful sight.”

Over the course of the 24 fateful hours wherein the movie takes place, the actors' training will be tested as their roles as the five men of the Fury – Wardaddy (Pitt), the commander; Boyd Swan (LaBeouf), the gunner; Grady Travis (Bernthal), the loader; Trini Garcia (Pena), the driver; and Norman (Lerman), the assistant driver – take on 300 enemy German troops in a desperate battle for survival.

"Fury" is now showing at a theater near you!
Posted by LENS Blogger at 9:45 PM

Email ThisBlogThis!Share to TwitterShare to FacebookShare to Pinterest
Labels: fury