Thirty years after the events of the first film, a new blade runner, LAPD Officer K (Ryan Gosling), unearths a long-buried secret that has the potential to plunge what’s left of society into chaos. K’s discovery leads him on a quest to find Rick Deckard (Harrison Ford), a former LAPD blade runner who has been missing for 30 years.

Niander Wallace’s obsessive quest to create the perfect replicant—totally compliant and unquestioning of human authority—resulted in the creation of the latest model, the Nexus 9.  Wallace see replicants as necessary for the survival of humanity…but he can only make so many.  Years before, his breakthroughs in genetically modified foods had brought the planet back from the brink of irrevocable global famine.  Trading on that debt, he was able to barter for the end of the replicant prohibition and, in the process, gain incalculable wealth…and untold power.

Cast in the role of Wallace, Jared Leto remarks, “I maybe have a different perspective on Niander Wallace than others would.  He is the guy who saved the world from starvation, so I don’t think his ego is too far out of control for someone who literally saved the planet.  He is someone who willed himself to power through really hard work and rigorous study.  Wallace is a genius and he’s also a bit of a madman, which he’d have to be.  He’s so fascinating and complex.  It was a really seductive role.”

Leto reveals that his connection to the “Blade Runner” universe goes back to “when I was very young and saw it on VHS.  There are films that come along and, for one reason or another, strike a chord.  They affect you in some way and change how you see the world.  ‘Blade Runner’ was a film that had a big impact on me and has always stuck with me.  There was something about it that spoke to me as a kid that I couldn’t let go of.  So it’s always had a special place in my heart and it’s something I’ve looked to for inspiration over the years.”

“Niander Wallace is a tough part to play because you have to deal with a lot of difficult dialogue.  It required an actor who could embrace those speeches and bring them to life with a strength and poetry.  And what can I say?  I chose a rock star and he just blew us away,” states Villeneuve, who adds that he appreciated Leto’s total immersion in every facet of the role.  “I had heard how Jared embodies his character and I wondered what he would do about Wallace, with regard to him being blind.  He came in and he was blind…he acted blind.”

In researching that aspect of his role, Leto spent time with people who were visually impaired, observing things like how they navigate a specific space or interact in conversation.  “I could feel that Jared was someone who was deeply passionate and very serious about what he was doing,” says Villeneuve.  “He was 100 percent committed.”

Correspondingly, Leto had nothing but praise for Villeneuve, commenting, “Denis is a rare artist.  What I love about him is that he’s eternally fascinated and enthusiastic and curious by nature.  He’s completely in the moment with the actors and there’s a sense of discovery and excitement around him that’s very compelling.  I found him to be just an incredible director and I’m truly thankful that I had the chance to do this film with him.”

Opening in Philippine cinemas and IMAX on Friday, October 6, Blade Runner 2049 is distributed by Columbia Pictures, local office of Sony Pictures Releasing International.
Posted by LENS Blogger at 7:31 AM No comments:

Girls Trip is a story of four ladies who outgrew their 90’s girl crew routine for their individual lives. One of them was a successful public figure that decided to bring the old crew together in one of her tours to reconnect with her friends.

Even though it is black, adult comedy, it also about how friendships endure. All of us have circle of friends but it doesn’t mean it’s perfect. Jada Picket-Smith and Queen Latifah are the popular ones in the movie. Nothing is new with Queen Latifah’s performance but it suits her character. Mrs. Will Smith, however, is not what you expected since she is a family person. But she can also be appealing for her stature.

As for Regina King, she delivered her character well. She gives balance to the group but she also shows that she shows her limitations and that she also needs her friends as much as they need each other. What I never expected was Tiffany Hadish who serves as a comic relief of the group. She is sexy as well as funny. I am expecting more movie projects with her soon.

I also like the setting of the movie which is mostly in the Big Easy. This movie is the one I can recommend. You may compare it to Sex and The City but it is still different. Girls Trip is an Ayala Cinema Exclusive and can only be screened at Trinoma and Greenbelt 1.

NEW LINE CINEMA'S “IT” A MONSTER HIT AT PH BOX-OFFICE

NEW LINE CINEMA'S “IT” A MONSTER HIT AT PH BOX-OFFICE
Acclaimed Chiller Scares up P50.18-M on its Opening Weekend

Directed by Andy Muschietti (Mama), the much-anticipated horror thriller has surpassed the opening figures of recent horror blockbusters, The Conjuring (P39-M) and Lights Out (P36.7-M).

In making the announcement, Francis Soliven, General Manager, Warner Bros. Philippines, said, “IT is the film that everyone is talking about, whether fans of the genre or not, driving moviegoers across the country to brave the cinema for their own encounter with Pennywise. We couldn’t be more thrilled with the results, and congratulate New Line Cinema, director Andy Muschietti and his phenomenal cast and crew on this fantastic opening.”

New Line Cinema’s horror thriller IT tells the story of seven young outcasts growing up in the township of Derry, Maine, who call themselves the Losers’ Club. Each of them has been ostracized for one reason or another; each has a target on their back from the local pack of bullies…and all have seen their inner fears come to life in the form of an ancient shapeshifting predator they can only call It.

For as long as their town has existed, Derry has been the entity’s hunting ground, emerging from the sewers every 27 years to feed on the terrors of its chosen prey: Derry’s children. Banding together over one horrifying and exhilarating summer, the Losers form a close bond to help them overcome their own fears and stop a killing cycle that began on a rainy day, with a small boy chasing a paper boat as it swept down a storm drain…and into the hands of Pennywise the Clown.

Directed by Andy Muschietti, IT is based on the Stephen King novel of the same name, which has been terrifying readers for decades. First published in 1986, IT became an instant classic. It continues to be counted among the best and most influential works of the undisputed literary master of horror, inspiring numerous film and television projects in the years that have followed. 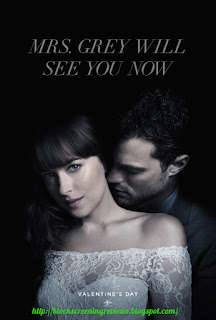 Jamie Dornan and Dakota Johnson return as Christian Grey and Anastasia Steele in Fifty Shades Freed, the third chapter based on the worldwide bestselling Fifty Shades phenomenon. Expanding upon events set in motion in 2015 and 2017’s blockbuster films that grossed almost $950 million globally, the new installment arrives for Valentine’s Day 2018.
Fifty Shades Freed is directed by Fifty Shades Darker’s James Foley (Fear, House of Cards) and once again produced by Michael De Luca, Dana Brunetti and Marcus Viscidi, alongside E L James, the creator of the culture-spanning blockbuster series. The screenplay is by Niall Leonard, based on the novel by James.

Fifty Shades Freed is distributed by United International Pictures through Columbia Pictures.
Posted by LENS Blogger at 9:03 PM No comments:

Enter the red door and watch the new trailer of Columbia Pictures' Insidious: The Last Key.

The creative minds behind the hit Insidious trilogy return for Insidious: The Last Key. In the horror thriller, which welcomes back franchise standout Lin Shaye as Dr. Elise Rainier, the brilliant parapsychologist faces her most fearsome and personal haunting yet: in her own family home.

Opening in Philippine cinemas in 2018, Insidious: The Last Key is distributed by Columbia Pictures, local office of Sony Pictures Releasing International.
Posted by LENS Blogger at 4:48 PM No comments: