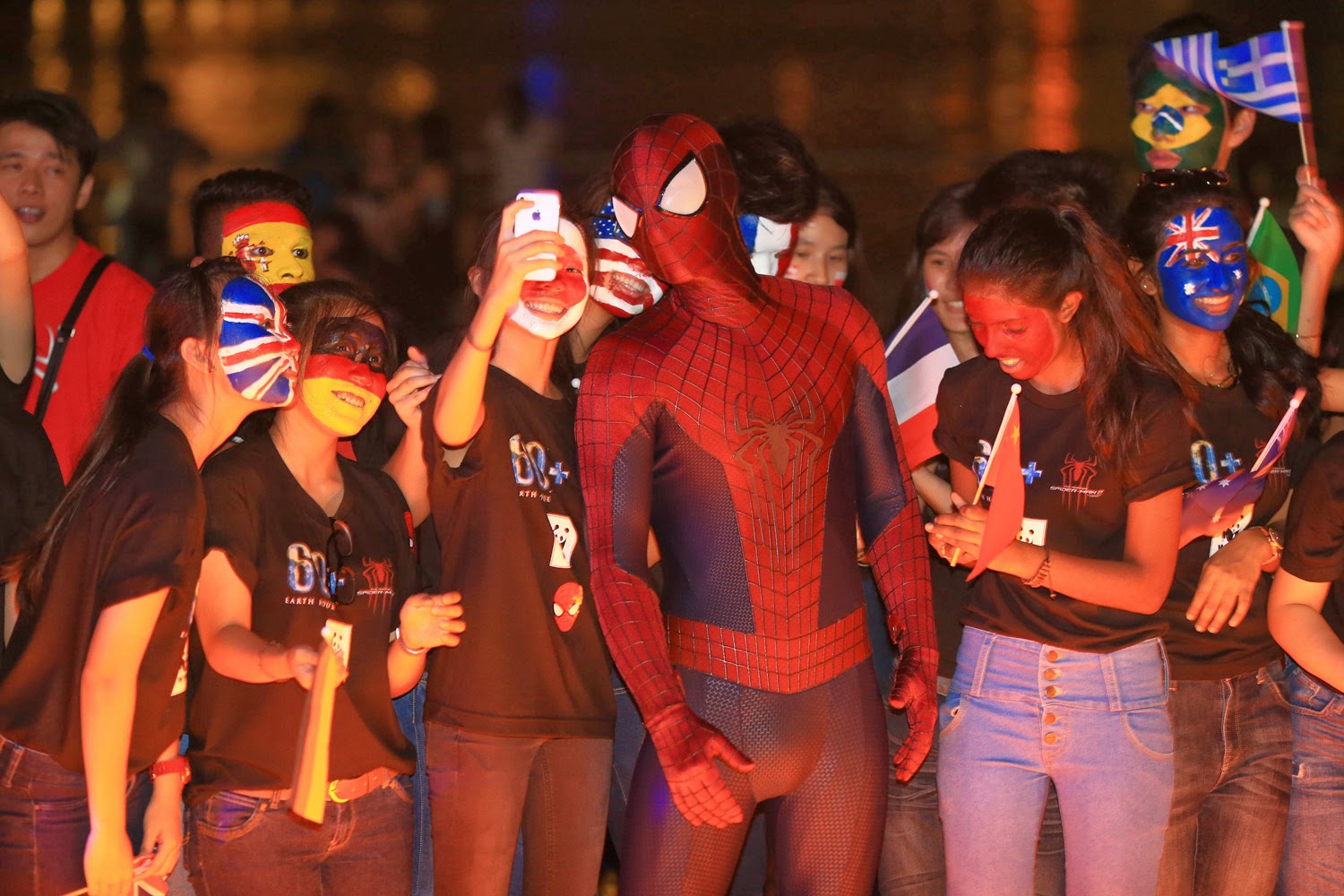 Sunday, March 30, 2014 – WWF's Earth Hour broke all records of participation in its eighth year, as Spider-Man last night joined millions of everyday Super Heroes from across the world in the world's largest celebration for the planet.
The event that has evolved into the world’s largest movement for the planet began its journey across more than 154 countries and territories from New Zealand, now sweeping across Asia with Spider-Man and the cast from the upcoming blockbuster “The Amazing Spider-Man 2,” including Andrew Garfield, Emma Stone and Jamie Foxx, sending a message to the world that anyone can be a Super Hero for the Planet from the global flagship Earth Hour event from WWF-Singapore.

WWF's Earth Hour event in Singapore saw lights switched off across the famous Marina Bay skyline, joining the Sydney Harbour Bridge and Opera House, the Bird’s Nest in Beijing, Taipei 101, The Wat Arun Buddhist Temple in Bangkok, the Petronas Twin Towers in Kuala Lumpur and more that have already taken part in the global celebration for the planet.
In The Philippines, official Earth Hour representatives, celebrities and Spider-Man fans gathered at the Eastwood Mall Open Park and SM Mall of Asia’s by the Bay to lead the switch-off.

In Australia, a massive candle lit display on the lawn of Parliament House in Canberra spelt out, ‘It’s Lights Out For The Reef’ as thousands across the country witnessed a special documentary about the impact of climate change on the threatened natural wonder the Great Barrier Reef.

As the lights now switch off at India Gate, the beyond the hour focus for children will be felt with WWF-India’s year-long education campaign for a monumental 15,000 schools across India who are switching off for Earth Hour and switching on to more energy efficient practices.

Lights also went off at Swayambhunath Temple in Kathmandu where WWF-Nepal will begin targetting 500,000 people in the country to lead environmental change through a Generation Green Campaign.

This year, WWF-Nepal also has the enlisted the help of none other than Spider-Man himself to support their Earth Hour Blue crowdfunding project, ‘A Flame Called Hope’. This project supported by Andrew Garfield aims to provide clean biogas energy to villages in Nepal’s Terai Arc.

“Earth Hour is a fantastic movement that has been created about conservation of our planet, which is something that should be on the top of our list as human beings. Let’s remember that the Earth is not ours, we are of this Earth. We all have a responsibility to each other in preserving our home, so it’s amazing to be a part of Earth Hour to help send that message,” said Andrew Garfield.

Earth Hour trended worldwide, with participants sharing their event experience and commitment for the planet across social media platforms that connect the world.

At the heart of the movement’s digital growth is Indonesia, where Earth Hour has become a massive, year-round youth led movement enlisting the support of more than 1.5 million people across more than 31 cities in the country. Creating simple and creative environmental actions through film, performances, social media and public gatherings, the teams promote environmental activities related to saving electricity, reduction in use of plastic, using less paper and tissue, planting more trees and using public transportation throughout the year.

“Earth Hour is much more than an hour. Every person can do their part no matter how big or small to save the planet,” said Emma Stone.

Meanwhile, The Philippines – one of the movement’s staunchest supporters – has since 2009 topped town and city participation levels to earn the title of Earth Hour Hero Country. Last 14 March, over 40 local government officials, city planners and environmental officers attended the Liga Para sa Klima, a multi-year WWF, Smart Communications and ArthaLand initiative to help local communities deal with climate-spurred storms, floods and droughts. The participants pledged not just to switch off their lights this Earth Hour – but to strive towards energy, water and food security. Other national and local government arms, plus corporations and communities have committed to support the switch off.

This year sees Earth Hour launch a new crowdfunding and crowdsourcing platform for the Planet, asking people to use their power to back a project or add their voice to solution based environmental projects across the world.

From donating to build climate smart fiberglass boats for Typhoon Haiyan affected fishermen in the Philippines, to giving Rangers in Indonesia better equipment to protect the forests and wildlife of Borneo and Sumatra and even helping fund indigenous communities in Colombia to generate sustainable means of livelihood that prevents deforestation in the Amazon – Earth Hour is calling on participants across the world to be Superheroes for the Planet by getting involved in Earth Hour Blue when the lights come back on.

Earth Hour next hit the Middle East, Africa and Europe, where the Sultan Ahmed Mosque (Blue Mosque) turned off its lights for the first time, joining the world’s tallest building Burj Khalifa in Dubai, the Kremlin and Red Square in Moscow, South Africa’s Table Mountain, St. Peter's Basilica in the Vatican City, The Eiffel Tower in Paris, La Sagrada Familia in Barcelona, Buckingham Palace in London, Edinburgh Castle in Scotland before the hour of inspiration made its way across the Atlantic to South America.

There, the Christ the Redeemer (statue) in Rio de Janeiro, The Angel of Independence in Mexico City are key landmarks taking part in the continent, and The Empire State Building and Times Square in New York City, Niagara Falls, Los Angeles International Airport, the Las Vegas Strip and more joined in the world’s largest celebration for the planet from North America, before Earth Hour wrapped up on the island of Tahiti in French Polynesia.

Earth Hour in 2014 sees the completion of the shift from event to movement status across the world, with the celebration cementing its place as a platform for beyond the hour activities for amazing environmental outcomes to protect parts of the planet including the Great Barrier Reef in Australia, the Arctic in Finland and the Amazon Rainforest in Colombia.

The focus on outcomes was inspired by Earth Hour’s success in past years that led to better legislation through the Russian Parliament to protect seas from oil pollution, the creation of a 3.4 million hectare marine protected area in Argentina and the world’s first Earth Hour Forest in Uganda to fight against massive deforestation in the country. All of these outcomes were powered by the crowd, showing that change for the planet can be achieved when the individual and collective realises their power.

People are encouraged to use their power by backing a project or add their voice at www.earthhour.org and sharing their #EarthHour activities on Instagram.

From script to screen, the environmental efforts in the making of “The Amazing Spider-Man 2” have been supported at every level and made the film the most eco-friendly tentpole in the studio’s history. Sony Pictures has extended these efforts in making the production and publicity tour carbon neutral, as well as “EcoSpidey” external outreach with a sizzle reel, game and Twitter campaign. Internally, the studio co-developed a unique online experience for employees to learn about Earth Hour and take action with the partnership, which has been made available to hundreds of thousands of employees at over 14 of the world’s largest corporations, powered by Practically Green.

Notes to editors
B-roll footage and the 1st Earth Hour 2014 compilation video can be downloaded at: www.ehour.me/eh2014vids
www.earthhourspiderman.com

To view the Earth Hour and Spider-Man Partnership Video, please go to: www.earthhour.org/spiderman