Leslie Mann’s impeccable timing and improv skills will soon be seen in the upcoming comedy movies “Mr. Peabody & Sherman, “Rio 2”” and in “The Other Woman.” 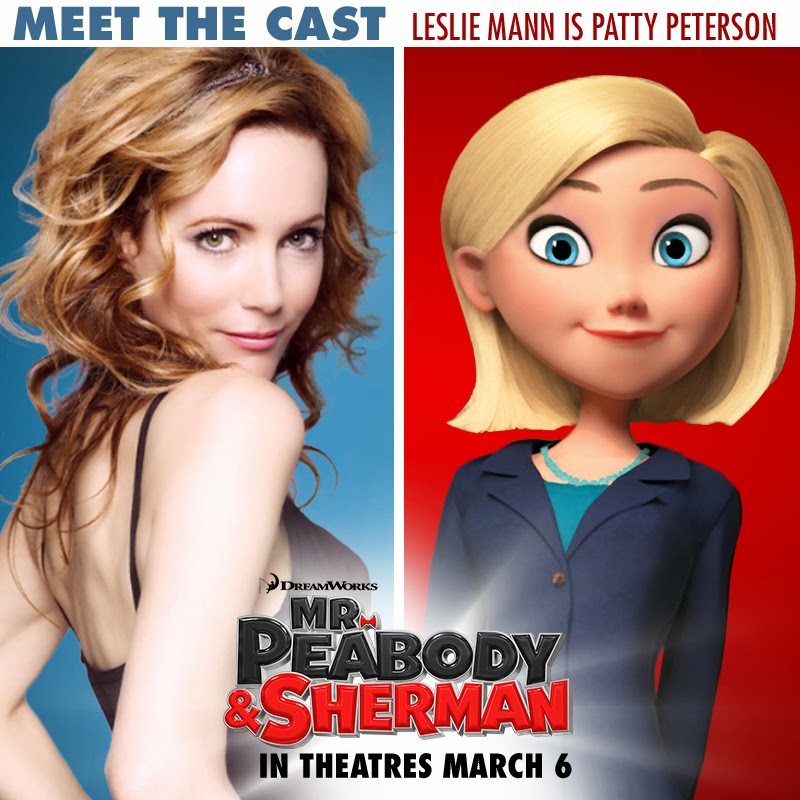 In DreamWorks Animation’s “Mr. Peabody & Sherman” Mann is the voice of Patty, parent to Sherman’s friend Penny where they set foot in Peabody’s home to settle the brawl that happened between their children. Director Rob Minkoff was thrilled to be working with comedy actress Leslie Mann, “Leslie has incredible charm and a great and unexpected attitude in her voice,” he says.

The worldwide smash hit “Rio” by Blue Sky Studios brings the wacky group of Blu and Jewel back in the height of adventure in “Rio 2” with Carlos Saldanha at the helm once again where Mann lends voice to Linda who is now married to Tulio (voiced by Rodrigo Santoro), Blu’s best pal.  The newlyweds are exploring the Amazon, where they discover there may be more Blue Macaws, and set out to find them.    Mann describes the game-changing discovery in “Rio 2,” “From the sky, a little blue feather falls between Linda and Tulio.  He tastes it and he realizes it’s a Blue Macaw feather.  And they go off in search of more Blue Macaws.”

In the upcoming hilarious estrogen-filled comedy, Mann plays wife to a cheating husband played by Nikolaj Coster- Waldau.  Together with Cameron Diaz, whose role as Waldau’s girlfriend who is unaware that his boyfriend is married, teams up with Mann’s character to teach their man a lesson and hit him where it hurts the most. Uncovering yet another philandering act, the two women further find out another ‘other woman’ in the mix played by Kate Upton.  In this laugh-out-loud comedy, three women are brought together by the same man who have wronged then and ultimately become the best of friends, forming a bond like no other.

Leslie Mann’s comedic timing and standout performances captivate audiences and critics alike. She recently starred opposite Paul Rudd in Judd Apatow’s “This Is 40.”  Mann’s stand out performance as Debbie in “This Is 40” earned her a Critics’ Choice Movie Awards nomination in the category of Best Actress is a Comedy.

Mann continued her recent voice performance work in the Oscar nominated “ParaNorman,” an animated 3D, stop-motion film from the team behind “Coraline,” including writer/director Chris Butler, Focus Features and LAIKA.  In 2011, Mann starred opposite Ryan Reynolds and Jason Bateman in David Dobkin’s “The Change-Up” and in 2009 was seen in the indie hit “I Love You Phillip Morris” alongside Jim Carrey and Ewan McGregor.

A native of Southern California, Mann studied acting with the improv troupe the Groundlings whose alumni include most of the familiar faces in comedy today. One of her first big breaks was Ben Stiller’s “The Cable Guy” with Jim Carrey and Matthew Broderick. While auditioning for the film she met future husband Judd Apatow. This film marked their first collaboration and the beginning of their creative professional partnership.

Mann and Apatow are longtime supporters of the non-profit organization 826LA. Founded by Dave Eggers, the organization focuses on encouraging disadvantaged youth’s writing skills by offering a range programs on-site at their tutoring center and for teachers to implement in their classrooms. Mann and Apatow’s philanthropic contributions were honored earlier this year with the Bogart Pediatric Cancer Research Program’s 2012 Children’s Choice Award for their work with children, and their families, who are dealing with pediatric cancer.  In 2009 the couple was also recognized by The Fulfillment Fund who honored them at their annual benefit gala.
Posted by LENS Blogger at 8:30 PM