There’s something that Jewel (Anne Hathaway) did not talk about with Blu (Jesse Eisenberg) in the first “Rio” family adventure outing – that is her childhood friend named Roberto (Bruno Mars).  In the upcoming adventure 3D movie “Rio 2,” Blu is suddenly pitted against Jewel’s childhood friend, Roberto who is the epitome of a Blue Macaw - a perfect specimen of a wild bird who charms everyone around him and makes Blu self-conscious. 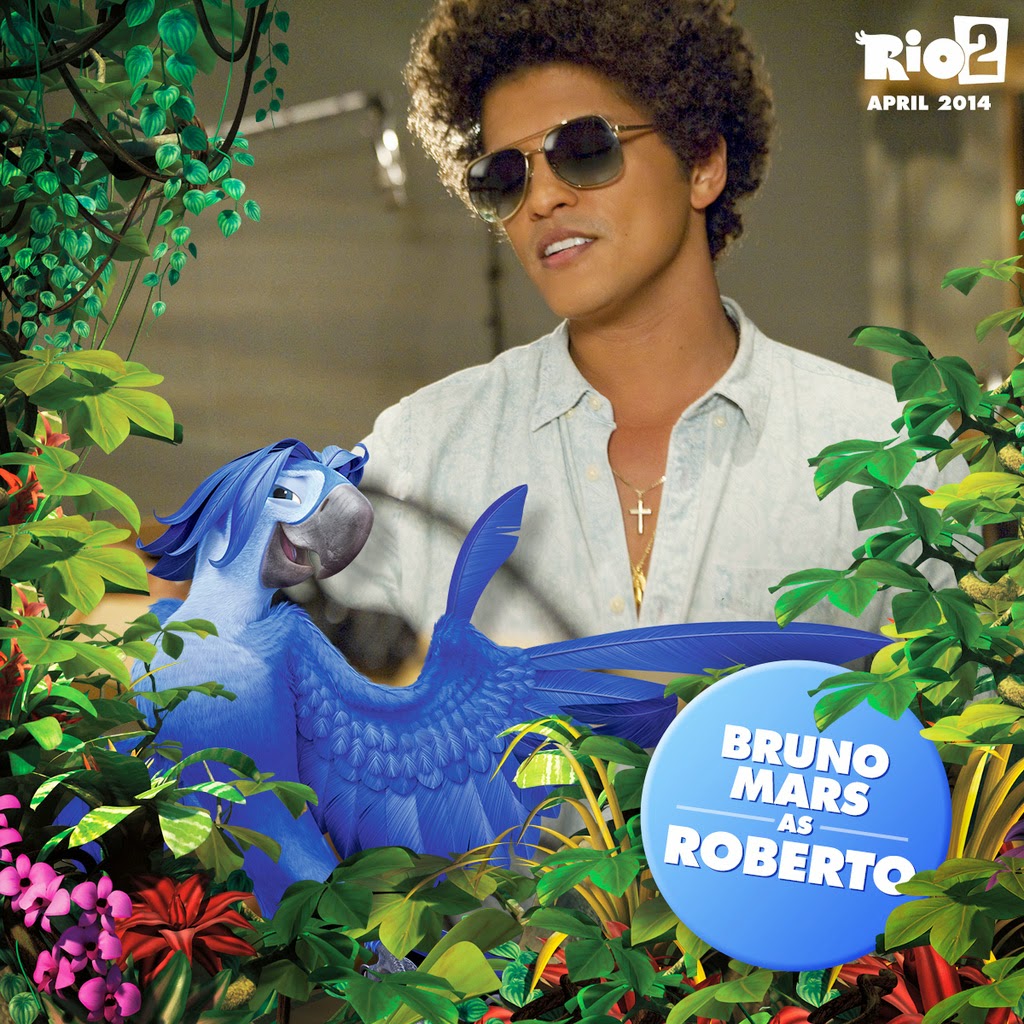 Bruno Mars joins the vividly delightful and upbeat musical world of Blu and Jewel in “Rio 2” where director Carlos Saldanha brings the adventure into the wild thick forest of the Amazon.  With the success of “Rio” the call for a sequel came quickly.  Having already teased a new life together for Blu and Jewel – and their three new arrivals – in the film’s finale, Saldanha pitched his idea for a new story.  What if Blu and his family aren’t the last Blue Macaws, he posited.  What would happen to the family dynamic?
Saldanha decided to set his new story in the mammoth Brazilian wilderness.  “I wanted a setting very different from the one we explored in ‘Rio,’ he explains.  “I thought we should move away from the city.”   So, in “Rio 2,” it’s on…in the Amazon, not only visually, but musically.  “We wanted to look at different musical ‘flavors,’ sounds and exciting new beats that make the soundtrack for “Rio 2” even bigger than the first film’s,” says the director.
If meeting a critical father-in-law, Eduardo (Andy Garcia) weren’t enough, Blu must also contend with Jewel’s childhood friend Roberto, played by Bruno Mars. “Roberto is pretty much the opposite of Blu – all charm and suaveness – and he can sing like an angel,” says Hathaway.  Eisenberg notes that, “Roberto and Jewel have a history and an almost secret language.  So Blu feels not only threatened by Roberto, but is frustrated because Roberto seems like the perfect guy.  Everything he does is heroic – and he’s a great singer!”
Roberto owes his vocal prowess to the music icon who voices him: Bruno Mars. The Grammy winner, who has sold over 115 million records worldwide and has a catalog of 22 Hot 100 hits as a singer, producer and songwriter, enjoyed his first foray into feature animation.  “I like that Roberto has a good heart,” Mars explains. “He’s a genuine dude and he really has love for Jewel – genuine love.  They grew up together, so they have a bond that’s pretty special.”
The filmmakers considered a long list of candidates for the role, but a Mars appearance on “Saturday Night Live” helped sealed the deal.  “I saw a clip of Bruno acting on SNL, and I thought he was really funny,” Saldanha remembers.  Producer John C. Donkin notes that casting Mars “transformed our thinking about the character.   He added a unique quality we initially hadn’t envisioned for Roberto, which we came to embrace, and the character really blossomed.”
If Roberto’s looks, talent and friendship with Jewel weren’t intimidating enough for Blu, the songbird hosts the clan in his magnificent mansion, located in one of the Amazon’s most impressive trees.  Interweaving roots create open pockets, perfect for rooms housing Blu and his family.  As the family settles into this exciting new world, Blu finds his learning curve to be a steep one.
Bruno Mars lends his signature vocal stylings to the track “Welcome Back,” in which his character Roberto expresses his joy in reuniting with Jewel.  The song was written by Bruno Mars, Philip Lawrence and John Powell, and produced by Bruno Mars and John Powell.
“Rio 2” (in 2D and 3D) will open April 9 (Saturday) nationwide in cinemas from 20th Century Fox to be distributed by Warner Bros.
Posted by LENS Blogger at 6:02 PM

Email ThisBlogThis!Share to TwitterShare to FacebookShare to Pinterest
Labels: bruno mars in rio 2