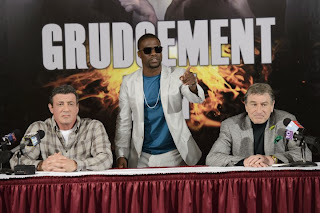 But with all honesty Grudge Match is a comedy/drama film that you might find it interesting to watch. If you’ve got tired of the drama with Balboa or too violent to see the life story of LaMotta then this film might be for you handed out with knick knacks while you nimble through the bag of popcorn.

Grudge Match is a story of two former fighters with a lot of story to tell with light hearted laugh out dialogue that certainly something to see. Stallone hasn’t done comedy in a while and this is something new at the same time De Niro hasn’t done any physical related film in a while so it’s like getting back on bicycle. 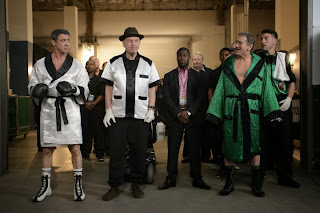 Both actors has not worked together since Cop Land which was almost 17 years ago and the chemistry work quite well as rivaled fighters. What makes this film knock you out of the canvass is the dialogue and Kevin Hart. His character is out of place which works both ways when you see him start talking and getting the characters around him become more just interesting individuals who are getting all the drama. Alan Arkin’s character could never replace Mickey Goldmill in Rocky but he adds up the buddy humor with Kevin Hart as Razor’s (Stallone) trainer. 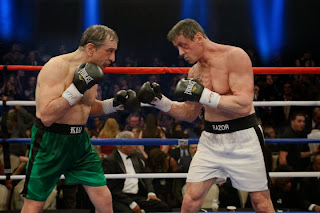 Of course every movie has a love interest and Kim Basinger just fills in the roster while Jon Bernthal adds up weight to the plot that makes this a strong cast. For someone who grew up watching the seasoned actors it’s kind of awkward to see them back in one frame aged with time.

But it is a good film to start 2014 and this one hoping it suits your curiosity how it turns out. If you ever see it doesn’t miss out with the two short post-credit scenes. Kevin Hart would definitely crack you up but the drama certainly will let you pull up a Kleenex. 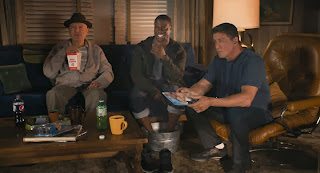 Overall Grudge Match is a C+ or gets a 3.5 out 5 rating for a tight film that has a strong cast with a well-balanced comedy and drama all rolled into one. It doesn’t hurt to know there’s a cameo in the second post-credit scene that you might want to see.

Opening in Philippine cinemas nationwide on January 15, 2014 Grudge Match may not knock you out of the ring, but surely will give you something to laugh about from Warner Bros. Pictures!
Posted by Mark Cerbo at 12:31 AM