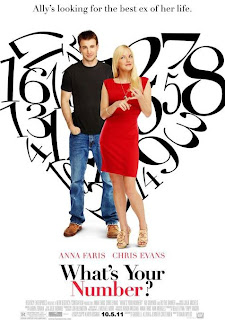 How many lovers should a person have in their lifetime? This is the premise of the story when Ally Darling, played by Anna Faris, reads an article in a magazine that convince her that she reached her limit of having partners a woman can have before she's deemed unmarriageable. Ally embarks on a quest to find  a mate without adding to her number from her previous lovers with the help of her Hottie-next-door neighbor, Colin, played by Chris Evans.
Review: Anna Faris is familiar in comedy roles but this is the first time I saw her in a sexy romantic comedy which is good that she is expanding her horizons besides her usual roles. Chris Evans is also making a name for himself recently after the title role of the superhero, Captain America. Both Anna and Evans had chemistry together with both their comical scenes as well as the romantic moments of the film. The movie is also a good date movie for couples and even among friends. I like the what the poster look like. It's like as if it's a cover of a pocketbook love story.
Magazine articles like Ally read is written by professionals but should not be taken too seriously like Ally did. In case of Ally, relationships always comes and go but it doesn't mean that it was intended. Like Ally, most have failed relationships. But the numbers doesn't determine when but how can you make your current or next relationship work. Ally, or anyone else, should not be dictated by the pressures of our society. We only have ourselves to evaluate our limits regardless of the failed relationships. These matters should not be rushed without thinking. 'What's Your Number' opens October 5 in cinemas and is distributed by 20th Century Fox. So, what's your latest number?

Email ThisBlogThis!Share to TwitterShare to FacebookShare to Pinterest
Labels: what's your number?