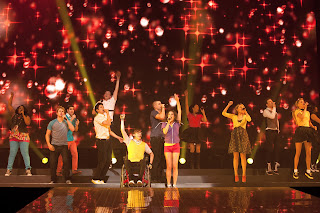 “Glee The 3D Concert Movie” employed unparalleled 3D technology used in “Avatar” to bring the audience right in the middle of a premium 3D experience rooting for their idols from the immensely popular ‘Glee’ television series.
“Glee The 3D Concert Movie” director Kevin Tancharoen closely collaborated with 3D pioneers and “Avatar” makers James Cameron and Vincent Pace to bring 3D into fruition while filming the concert during their sold out tours.  Taking into consideration the waves of 3D movies that came out after “Avatar,” Tancharoen made sure that the 3D experience will be worth the audience will pay for in watching “Glee The 3D Concert Movie.”
Tancharoen, whose roster of clients include Britney Spears and the Pussycat Dolls further shares in a stream of live chats over the internet how the film is entirely different from his previous works on music videos and films. “This is different from the other works I’ve because this is completely live.  We had to set up all the cameras in various places, and that they all have to be on their mark. So there’s a whole another technical hurdle you had to overcome with that.”
“The 3D aspect lets you feel just how big the show is. Vincent Pace was the guy who created the technology that we used.  There’s a huge truck that him and James Cameron designed and used for Avatar. So it’s like a mother ship of electronics, there were so many monitors in there and a bunch of people doing different 3D convergence monitors.  And so it felt like you were running a space ship and there was a lot to handle,  and that will be the biggest difference since you had to keep all the technical things in mind while making sure the show is moving along and everyone in the right place,” Tancharoen enthuses on filming the movie in 3D.
Concluding fans’ speculations on what to expect on the film, the director notes that all the spectacle that is Glee is totally tied with the overwhelming support by the fans.  With this, the film is infused with testimonials from fans whose lives had been touched and changed by Glee and its characters.
For two weeks only - “Glee The 3D Concert Movie” opens on September 21 nationwide in 3D digital screens from 20th Century Fox to be distributed by Warner Bros.
Posted by LENS Blogger at 9:03 PM