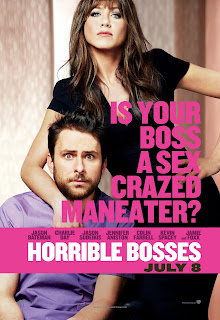 Synopsis: Three friends share their frustrations about how horrible their respective bosses over few drinks until they were given no choice but to put an end of their horror in the workplace once and for all.
Review: Horrible Bosses is a movie with an all-star cast. Almost all of the working class individuals have a share of experiences with horrible bosses. I have, my mom has one, and so does my sister. These are the bullies in the workplace. This usually happens for lot of reasons. These types of bosses wants to maintain power and is intimidated about their successful subordinates especially if they don’t share credit due from their hardworking subordinates. This is the reality we face in the real world. Sometimes, it is also a cycle. Socialist educator Paolo Freire mentioned in his book, “Pedagogy of the Oppressed”, Freire said that when the oppressors are overpowered by the oppressed, the oppressed have a tendency to be the oppressors themselves. Case for example, the story “Animal Farm”. The humans are the oppressors and they were overthrown by the animals lead by the pigs. Then, the pigs ruled the farm and were more horrible than the human oppressors.
Getting back to Horrible Bosses, the obstacle of the three friends reminds me of an Edgar Allan Poe story, The Cask of Amontillado. Because it requires them to execute their agenda that requires them to be discreet. That is the fun part.
The movie’s humor is dark meaning it is more adult oriented. Jason Bateman returns to acting. Even he shares being the protagonist in the movie unlike his younger years as a teen matinee; he recently starred in another movie, The Change Up, also showing this year. Colin Farrell sacrificed his good looks for this movie. Jennifer Aniston takes a break from her usual romantic comedies. Also sharing the spotlight with Bateman, are Jason Sudeikis and Charlie Day with an all-star supporting actors, Kevin Spacey and Jamie Foxx.
Horrible Bosses opens in cinemas September 21 and is distributed by Warner Bros. Philippines.
Posted by LENS Blogger at 11:03 AM