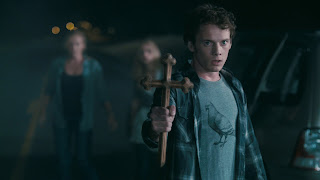 Fright Night is a remake of the 80’s movie of the same name. High school senior Charlie Brewster notices the trouble in his neighborhood when Jerry, a new neighbor, moved in besides his house which he find coincidental and discovers that Jerry is a vampire.
Review: I got to see the original Fright Night back when I was a kid. Even though I already watch it, the newer version still gets me jumped from my seat when I get surprised. This is a vampire flick after all. The newer version of Fright Night brings back old-school vampire myth to the new generation that got used to Twilight Saga vampirism. These vampires don’t sparkle but they can also be charming before you know it, you are already fanged.
The newer version is modernized and was set in our present time and is more up-to-date. For the story, they didn’t change it but there were other character differences from the original but it makes the characters more involved. For example, if you get to watch the original Fright Night, Peter Vincent is not an old man and is not a TV show host.
Unlike the original version, the newer version is more fast-paced but the suspense is still there. But I missed some minor twist that involves a vampire myth that the newer version omitted from the original but it is not an issue for the current story.
For the casting, Anton Yelchin grew up since I last saw him at Terminator: Salvation and Star Trek (2009). He is now more buffed which is really ideal for his role as Charlie Brewster. For Colin Farrell, I would never think he can make a good part of the vampire Jerry. Compared to the original, Farrell made vampire Jerry ruggedly handsome and just as scary the same time. Vampires in the movies and television have many variations throughout the years. I can compare the vampires in this new version to the vampire Angel and Buffy the Vampire Slayer.
If you are watching in 3D, if you see the 3D background is not good, the cinema may haven't calibrated the movie before playing. Try wearing the 3D goggles upside down. You may look weird but you will enjoy watching.
The movie also stars Toni Colette and Lisa Loeb. Fright Night opens in cinemas September 7 by Columbia Pictures Industries, Inc. and distributed by Walt Disney Studios Motion Pictures International. Thanks to Columbia Pictures for the advance screening held at SM Megamall Cinema 1 last September 5.
Posted by LENS Blogger at 8:45 PM