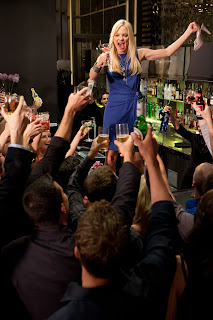 Noted for her canny portrayals in comedy films, Anna Faris stars in the risqué romantic comedy “What’s Your Number?” opposite the equally hot Chris Evans.
Tapping the taboo in adult conversations on the number of sex partners, “What’s Your Number?” initially introduces us to Ally Darling (Faris) on a quest to find a husband.  Ally is a delightfully flawed woman who has just read in a magazine article warning that women who have had relationships with 20 or more men are unlikely to settle down and get married.  In a panic, she realizes that she has reached her limit and instead of looking for a new boyfriend, she decides to revisit her 19 exes hoping to find the ideal one.  Assisting her on this quest is her attractive neighbor Collin (Evans).
Commenting on her character’s habit of pleasing her boyfriends by adapting to them in different ways, “I think there’s a social pressure to be in a relationship, to get married and have kids.  In our opening scene, Ally is a vegan because her boyfriend is a vegan and she gets dumped.  Then there’s this wealthy guy and she pretends to be upper class and one of her boyfriends is British so she goes all out on the accent,” says Faris.
“But I don’t think she’s being insincere, she says ‘here is how I’m going to make it work, I want to be in this relationship.  I’ve done that and I think lots of women have done that,’ reflects Faris on her character.
Also starring on the film is Faris’ real-life husband Chris Pratt as Disgusting Donald, one of Ally’s exes.  His character triggered Ally’s desire to revisit her past relationships.  When they are reunited, he’s morphed into a total heartthrob. Sadly for Ally though, he is now engaged and not at all interested in her.  “I couldn’t be more proud of my wife.  A lot of actresses have their image to worry about or vanity; but Anna will fall down and have chocolate all over her face and toothpaste all over her mouth.  She’s the hottest clown in the world,” Pratt says.
Faris brings Ally to life with her impeccable comic timing and authenticity that most women will easily identify with.  But Faris points out that Ally is a more complex heroine, “I’ve always loved the idea of a woman screwing up, not knowing what to do. This totally appealed to me because I keep hearing from my friends and other women that “What’s Your Number?” feels like their story.”
“While the comedy is entertaining, the movie examines some serious issues on self-appreciation,” says co-scribe Jennifer Crittenden.  “Ally is trying to find the right guy who will also appeal to her family.  But ultimately of course, you have to follow your heart, your gut and be who you are. She needs to make her own choices based on who she is as a person.”
Anna Faris has already displayed her comic talent in hits from the “Scary Movie” series, “Just Friends” and “House Bunny.”  Other impressive appearances in acclaimed dramas include “Lost in Translation” and “Brokeback Mountain.”
It’s a date with your current and ex lovers when “What’s Your Number?” opens on October 5 in theaters nationwide from 20th Century Fox to be distributed by Warner Bros.
Posted by LENS Blogger at 9:17 PM

Email ThisBlogThis!Share to TwitterShare to FacebookShare to Pinterest
Labels: what's your number?