COOPER, DIESEL FORM UNLIKELY ALLIANCE IN “GUARDIANS OF THE GALAXY”


Bradley Cooper and Vin Diesel team up for Marvel's “Guardians of the Galaxy” as Rocket, a genetically altered, cybernetically enhanced talking raccoon, and his friend Groot, an advanced humanoid tree creature, respectively.

Describing the two unusual characters, director James Gunn says, “Rocket is not the happiest guy in the world. He’s a sad, malformed creature who has been taken apart and put back together again. He has experienced a lot of pain in his life and is grounded as a result and, because of that, is probably the heart of the movie in many ways, much like Groot, Rocket’s only real friend, who can only communicate with three words, yet his story breaks your heart.” 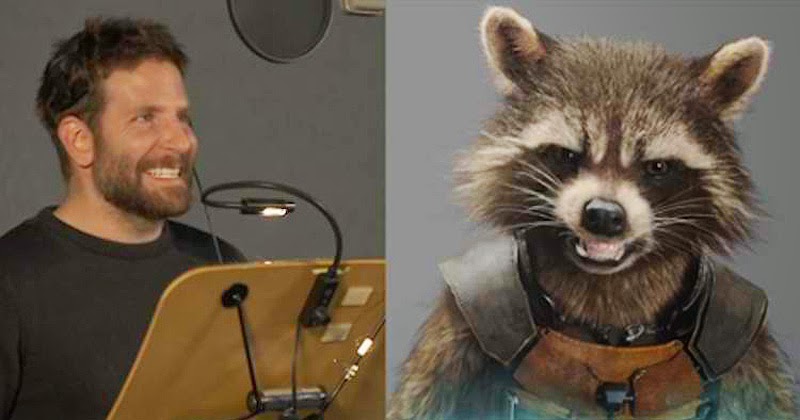 For Bradley Cooper, doing voice-over for a character was a first. “The whole process is so new to me,” says Cooper. “It’s like an education every time and it’s interesting.”

He adds, “There’s a lot of humor and a lot of heart in this movie. All the relationships are very clear and emotional and the stakes are obviously high and with the flavor of James Gunn, it has a comedic appeal to it. I think people are going to be blown away by how unique and fresh this film is.”

Cooper describes how he approached getting a handle on Rocket: “I talked a lot to James to figure out who Rocket is. I was really mining his brain and looking at images he showed me. I also read tons of stuff but it was just really trial by error and just finding him based on what they had already shot.”

The friendship between Rocket and Groot is certainly a unique one as Cooper explains: “It’s a very old-school male friendship where no one’s feelings are talked about. Rocket is protective of Groot but at the same time you feel like maybe it’s a means to an end because Groot’s his protection too. Rocket’s a raccoon; he doesn’t have the ability to do things that this huge tree can.” Cooper laughs, adding, “You guys understand what I’m saying, right? You know what trees can do that raccoons can’t. Wait, what?”

Gunn is enthusiastic about casting Vin Diesel as the voice of Groot and says, “As far as I’m concerned, Vin brings as much to his role and to the movie as any other performer. With just a handful of lines and hundreds of grunts he creates a character completely out-of-this-world that we still love. I can’t imagine anyone able to balance gruffness and sweetness like Vin—and that’s really what’s at the core of Groot. Sometimes I watch Groot on screen and—even though I stood beside Vin through every moment of his recording—I can’t believe the voice is coming out of a human being. He truly channels the character in an almost supernatural way.”

Diesel admits that Groot’s one line of dialogue sold him on the character. He explains, “How they were able to reinforce the theme, the meaning and the message of the whole movie in one line of character dialogue impressed me. And how that line translates in the third act is really going to be something that allows the audience to feel like they are part of this world and understand the stakes and what the characters are going through.”

Diesel had previously voiced the Iron Giant in the film by the same name a few years back and found voicing Groot to be a fun process as well. “Breathing life into a character is priceless because it’s timeless,” comments the actor. “Iron Giant has been with me for 15 years and even now when I pick my kid up from school all the kids say, ‘Oh, hi, Iron Giant.’ So I can imagine that by next year I will be my kid’s Daddy slash Groot.”

Diesel describes working with director James Gunn as “incredible,” and adds, “You can see his enthusiasm about taking this film and going beyond expectations. It’s amazing how successful the Marvel Cinematic Universe has been and to see someone like James, who is committed to trying to break the mold, is inspiring and always a blessing as an artist to work with.”

From Marvel, the studio that brought you the global blockbuster franchises of Iron Man, Thor, Captain America and The Avengers, comes a new team--the Guardians of the Galaxy. An action-packed, epic space adventure, Marvel's "Guardians of the Galaxy" expands the Marvel Cinematic Universe into the cosmos, where brash adventurer Peter Quill finds himself the object of an unrelenting bounty hunt after stealing a mysterious orb coveted by Ronan, a powerful villain with ambitions that threaten the entire universe. To evade the ever-persistent Ronan, Quill is forced into an uneasy truce with a quartet of disparate misfits--Rocket, a gun-toting raccoon; Groot, a tree-like humanoid; the deadly and enigmatic Gamora; and the revenge-driven Drax the Destroyer. But when Quill discovers the true power of the orb and the menace it poses to the cosmos, he must do his best to rally his ragtag rivals for a last, desperate stand--with the galaxy's fate in the balance.

Email ThisBlogThis!Share to TwitterShare to FacebookShare to Pinterest
Labels: guardians of the galaxy