I am already a fan of Director Matti way back in Scorpio Nights 2. I got to meet him the first time during the sneak peek of Tiktik: The Aswang Chronicles. I got to meet him again with his new movie for the 20th anniversary of Star Cinema in collaboration with Reality Studios. 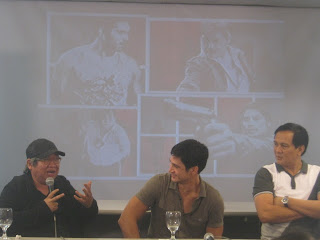 During Tiktik, Erik Matti said that he wanted to do something new in the movies. Something with substance that not all local movies has. Something that we can compare to Hollywood movies. It's rare thing for our local movies that makes the audience think than just entertaining them.

On The Job is that kind of movie that gives a different movie experience we never had. Unlike the action movies in the past, OTJ is a crime thriller. It is also fitting since the first movie of Star Cinema was an action movie.

Direk Erik Matti said that he needed to cast big names in showbiz so it will be given notice. Piolo was instrumental to influence another actor Gerald Anderson to be part of the project. Also, it needed to be remembered with the best chase scene that was never done before. "It may be look like a documentary but it was all a set up, says the director.

Joey Marquez said, "I could not imagine myself to be part of this project since I am a comedian." He jokes, "Action speaks louder than my words." Matti on Marquez: (He's) "Kupal(crappy) but charming."

On being compared to the late Lino Brocka, Direk Erik says "I am not Lino Brocka(but) I have strong messages about the Philippine humanity.

The script/story is about 4 years old. Although it is targeted as a mainstream movie, they had it entered at Cannes and little did they expect that it will gain attention and awards even of the actors. If the French can appreciate this kind of movie, we should also appreciate the quality it has not the usual local movies that has no substance.

On The Job is released and distributed by Star Cinema. Part 2 of the blog conference with the rest of the cast in my next post.
Posted by LENS Blogger at 9:52 PM

Email ThisBlogThis!Share to TwitterShare to FacebookShare to Pinterest
Labels: on the job, otj movie