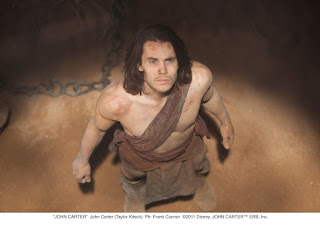 It isn’t often that an actor gets the opportunity to play a Civil War veteran who gets transported to the planet Mars and meets a beautiful, strong-willed princess so that he can help her fight a civil war of her own. For Taylor Kitsch, who put himself on the map playing Riggins on the highly acclaimed TV series “Friday Night Lights,” the chance to play the title role of John Carter in Academy Award®–winning writer/director Andrew Stanton’s “John Carter,” was something he was not going to pass up.
“When I first read the script, I was drawn to the character-driven story and the fact that it will benefit from being a big studio movie,” he says. “It gave the filmmakers a chance to make the film in an amazing way. You get to know John Carter’s background with his family, the Civil War and everything. It’s heavy to play but it gives me such a base to draw from through the whole movie. For example, in one scene, you’ll see Carter playing with his rings and you’ll know what that truly means to him. It’s great as an actor because it’s something to really dive into.
“The grandeur, and what Stanton’s done, and how it works and how it’s all intertwined is quite epic and I felt that as an actor,” he continues. “My character is definitely on an epic adventure. We go from the 1800s on the streets of New York to the Arizona Territory in the West to the plains of Mars—all in one movie. As an actor I experienced my character John Carter in many different settings that had specific emotions and needs that I had to evoke.
“I can’t recall any movie that’s done it the way we have. The ending brings the adventure full circle brilliantly, but you’ll have to see it to understand what I mean.”
Like all of the other actors working on “John Carter,” Kitsch loves working with Stanton. “Andrew Stanton’s vision was very infectious,” he says. “He’s just brilliant and you just have to go along with it. You have to believe in it because it’s such an incredible vision that if you don’t, you’re not doing the story and the character justice.
“Our first meeting was great. I was so excited because I am a huge fan of ‘Wall-E’ and, come to find out, he’s a fan of ‘Friday Night Lights.’ It’s just been a great relationship from the get-go and trust has been there from day one. It was great to be able to have him explain his vision and then to become part of it.”
Kitsch also credits Edgar Rice Burroughs, who created the character of John Carter in 1912, with the power of the story and of his character’s journey. “I think Burroughs was way ahead of his time, especially for his first science-fiction novel,” Kitsch states. “It relates to what we’re living and doing right now—the lack of natural resources, the energy problems, the wars going on from racism to religion. He was hitting it all almost 100 years ago.
“And even in the film we address all those things,” he says. “What Stanton has done is taken the base of John Carter from Burroughs and definitely gone into more depth of who John Carter really is and where he comes from.
“Stanton has given me so much more to dive into with the character that wasn’t realized in the books. It’s been really great, script wise, to draw from that.”
The love story in “John Carter” has also been a great experience for Kitsch to play. His co-star, Lynn Collins, plays Princess Dejah Thoris and their relationship has taken on a full, exciting life of its own. Kitsch credits Stanton and his screenplay for this. “In the books it’s almost love at first sight and John would do anything for Dejah, but in the film you follow an arc that happens with John and Dejah as their relationship develops,” he explains. “I love the banter back and forth. We rib each other and we challenge each other through different scenes and finally the truth just comes out. It’s a love story with everything else going on but it means so much to the film. It’s quite the backbone of it.
“Our characters’ relationship at first is about pushing each other’s buttons to see how we’ll each react. That changes as we grow and she stops trying to test him and begins to see the real John, the part he can’t even see himself.
“But through the relationship, Dejah and John have so much going on that those moments become very special and, in a sense, earned. It would be unreal just to play that relationship as it is in the moment. You have to understand that the stakes are always so high, so you have to create these small moments that are earned and not just like, ‘Oh, you’re pretty today.’ You definitely have to work and earn those moments, which make them that much more special in the film.”
In the end, Kitsch has never worked harder or been more grateful for an experience as he is for his work on “John Carter.”
“Honestly, no job will ever be as physical and exhausting, yet rewarding, as this one,” he says with a smile. “I’ve been tested on every level and then some. The pure physicality of it, to the arc of the character, to the emotional spectrum he has. I’ve had to keep up my endurance this whole time, but again what you put in is what you hopefully get out. And I think that will be very specific to this role.”
“John Carter” is distributed by Walt Disney Studios Motion Pictures International through Columbia Pictures.
Posted by LENS Blogger at 3:05 PM