Our culture is influenced not just by our Asian neighbors but also from the Westerners but the most influential Westerners are the Spaniards. Most of our traditions and culture we got from Spain. It is just fitting that we also see their culture in the movies they produced and watched. 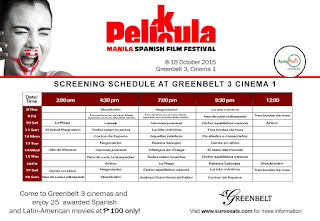 Ayala Cinemas once again hosting the festival. It is not just focused on Spain only but also the Latin American movies since they also speak Spanish. After in Ayala Cinemas, the festival will also be in the National Commission of Culture and the Arts in Intramuros.

During the launch and screening, I got to see the actress the movie I watched, Felices 40. Here is the schedule of each movie presented and see you at the cinemas. For more updates, follow this blog and like L.E.N.S.blogs on Facebook.
Posted by LENS Blogger at 12:49 AM