Rose Byrne struts her way into a global chase against a group of undercover agents in “Spy” starring alongside Melissa McCarthy, Jason Statham and Jude Law. 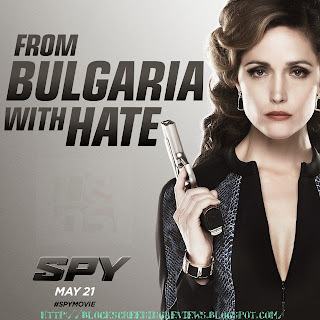 Byrne takes on the role of Rayna, a beautiful and privileged Oxford-educated daughter of a recently deceased arms dealer who becomes frenemies with Susan Cooper, a novice spy who gears up for action after Fine (Law) suddenly goes off the grid during a dangerous assignment. Agent Cooper leaves her dreary desk job behind, entering the world of international espionage in Europe.  Soon, Rayna and Susan butt heads when Rayna has come into possession of an unusual inheritance, a small tactical nuclear weapon enough to give the world a total meltdown.

Rose Byrne says her character is all about status. Rayna wears garish outfits for grand entrances into the finest hotels. Perpetually bored and unimpressed, she lacks a sense of humor and has a brutally direct manner of speaking.    “I liken her to royalty, or a member of a corrupt dynasty. She’s posh and talks as if she’s from another era, an effort to compensate for her poor Bulgarian roots.” Despite her coldness, Rayna feels slightly sympathetic and curious about Susan, who reminds her of a “sad Bulgarian clown.”

Of Byrne, who also co-starred with her in “Bridesmaids,” McCarthy says, “I would work with Rose 300 million times. She manages to play a character that’s dastardly yet likeable, which is a tricky thing to pull off. You don’t see the work behind her performance. You just see a remarkable character who turns on a dime.”

While filming and on the run, Rayna’s adventures transitions to a far more luxurious form of air transport, McCarthy and Rose Byrne shoot a flight sequence onboard Rayna’s private jet, which is replete with her unmistakable style – that is to say, gaudy leopard skin upholstery and Versace red and gold wallpaper. Having grown interminably bored in Rome, Rayna is whisking her newfound “sad Bulgarian clown” companion to Budapest for drinks. Chaos breaks out during the flight, and the plane’s occupants find themselves in a nosedive, experiencing the zero gravity effect of weightlessness.

To overcome the challenges of filming this sequence, SFX supervisor Yves De Bono had the plane mounted on a 20-degree gimbal, allowing it to tilt and swivel in any direction. Movement was hydraulically controlled from the ground, and both cast and stunt team were harnessed to cables to simulate floating. Rose Byrne spent time in a swimming pool practicing controlling her physical motions to prepare for the sequence, which required a week to complete.

Director Paul Feig says Byrne’s role as Rayna is his favourite, “Rose is one of the most talented comedic actresses out there and nobody knew for years that she was a comedic actress. She plays Rayna Boyanov, the daughter of a black market arms dealer, a spoiled rich girl who grew up in Bulgaria but went to school in London and has completely got rid of her accent. Now she's got a very posh English accent, composed and classy, but she is swearing all the time and she is so funny.”

“Spy” opens this May 21 from 20th Century Fox to be distributed by Warner Bros.
Posted by LENS Blogger at 3:10 PM