“THE POST,” “DARKEST HOUR,” “CALL ME BY YOUR NAME” READY FOR GLOBES GLORY

“THE POST,” “DARKEST HOUR,” “CALL ME BY YOUR NAME” READY FOR GLOBES GLORY JAN 8

Three critically acclaimed films that will soon be shown in the Philippines are expected to reap honors in the 75th Golden Globe Awards on Monday morning, January 8. 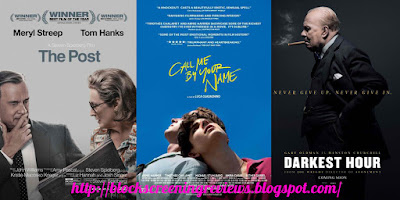 They are Steven Spielberg's The Post, Luca Guadagnino's Call Me By Your Name and Joe Wright's Darkest Hour – all distributed locally by Columbia Pictures.

Starring Tom Hanks and Meryl Streep, The Post tells of a cover-up spanning the terms of four U.S. Presidents that pushed America's first female newspaper publisher and a hard-driving editor to join an unprecedented battle between journalist and government.

The Post marks the first time Meryl Streep, Tom Hanks and Steven Spielberg have collaborated on a project.

Meanwhile, Call Me By Your Name, the gay romantic drama set in Northern Italy in 1983, is the story of seventeen year-old Elio (Timothee Chalamet) who begins a relationship with visiting Oliver (Armie Hammer), his father's research assistant, with whom he bonds over his emerging sexuality, their Jewish heritage, and the beguiling Italian landscape.

Hailed for its “ravishing filmmaking and piercing wisdom,” Call Me By Your Name is vying for Best Picture Drama, Best Actor (Chalamet) and Best Supporting Actor (Hammer).

Finally, Darkest Hour gets a Best Actor nomination for its lead Gary Oldman as real-life British Prime Minister Winston Churchill, who must decide whether to negotiate with Adolf Hitler, or fight on against incredible odds.

Call Me By Your Name opens in Philippine cinemas on January 31, followed by Darkest Hour on February 14 and The Post on February 21.
Posted by LENS Blogger at 11:24 PM

Email ThisBlogThis!Share to TwitterShare to FacebookShare to Pinterest
Labels: 75th golden globe awards, call me by your name, darkest hour, the post