Fan-favorite Robert Downey Jr. reprises his seminal portrayal of Tony Stark/Iron Man for the fifth time in Marvel’s “Avengers: Age of Ultron.” In Marvel’s “The Avengers” Tony Stark struggled to become a team player and in “Iron Man 3” audiences saw him transcend his dependency on the tech that was keeping him alive. So where does he go now? 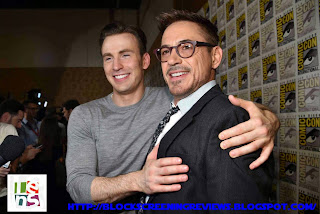 To Downey Jr., the answer is simple: “There’s all this unfinished business. There’s the matter of a certain wormhole that opened over New York and the imminent threat that still implies, so Tony has turned his attentions more toward a bit of a post-Reagan-era, Star-Wars-type notion and he likes to call it Ultron.”

Right from the beginning of the project, Downey Jr. found a lot to like in writer/director Joss Whedon’s compelling screenplay. “To me it’s further developing the complexities of the relationship between all the main folks,” comments the actor. “I like that Thor has a beef with me and then eventually has to say I’m right. It’s just interesting and the way it all wraps up to me is super exciting, but strangely my favorite part about ‘Avengers: Age of Ultron’ is what’s brought into potential at the end.”

But returning to Tony Stark and The Avengers was bittersweet for the super-talented, much-loved actor. “This time around I felt like I really got closer with the cast members, and Joss and I are pals,” says Downey Jr. “But more than any other of the Marvel movies, for me I feel like this is a feeling of an ending of an era and the beginning of another. Obviously some of that is informed by the new blood coming through, with Elizabeth Olsen and Aaron Taylor-Johnson, and I welcome it. So there’s a sense that we’ve been around just long enough to be a guard that may or may not be passing or changing.”

The new kids on the block, Elizabeth Olsen who plays Scarlet Witch and Aaron Taylor-Johnson who is Quicksilver, definitely shake things up for Tony Stark and the rest of The Avengers. Downey Jr. explains the new dynamic: “Tony knows The Avengers; they are the Super Heroes that he has been in the trenches with. He’s only really just gotten over his mild dose of PTSD, so to have something like a Scarlet Witch whispering in one ear and a Quicksilver bolting and flashing past the other is a little bit like ‘hmm.’ It’s like that friend or foe thing, but the way that they’ve been developed as from their origins, albeit how they’ve been depicted in the comics and other attempts thus far, this one is incredibly smart and the nice thing about it is they really fit into the story. What’s great about it is it puts Tony and certainly the other Avengers off-kilter. Also it would seem initially that there’s somewhat of a vendetta, and it sucks when you know there’s someone who’s after you who’s mad and they have a good reason.”

Explaining Tony Stark’s place on The Avengers team this time around, Downey Jr. says, “I don’t know of anyone in the history of any Super Hero franchise who seems to never run out of money. Tony’s footing the bill and he can swing it, obviously. The real thing is that he wants to localize, look after and nurture this necessary counterbalancing faction, which is The Avengers, and have them all where they are. Then there’s part of him that’s still the designer and the tweaker and a bit of an engineer and the mechanic who just wants to help them all do things a little bit better. So his comfort is like someone who buys a football team and then wants to redo their uniforms and give them better equipment and keep them safer on the field and make them stronger and faster.”

In Marvel’s “Avengers: Age of Ultron,” Captain America, played by Chris Evans, is clearly the leader, but it seems to work for Tony Stark this time around. “There are really only two relationships in Tony’s life in which he’s been willing to assume a lower status and one’s with Pepper obviously, equal footing, and the other’s with Cap,” informs Downey Jr. “It’s always whoever does the job best should probably do that job and Tony’s bringing a lot to the table and Cap has the most experience. It’s also nice to feel like there’s someone under whose tutelage you become better at what you have to do and no one’s more battle-seasoned than Cap.”

There has been much speculation about what the future holds for the Tony Stark/Iron Man character. Downey Jr. admits he does not have the answer, but offers, “It’s hard to say. I’ve been talking with Kevin Feige and some of the creatives and there are really good ideas. It’s been this thing where some part of it was just smart luck and then the rest of it has been this kind of thing that’s gently unfolded and at the right pace for the right amount of time to keep working. So whatever the future holds for Tony I want it to be a future that works for the highest good for the whole magilla and I just want it to keep feeling like there’s more to do and more to say.”

When fans sit down in theaters to see Marvel’s “The Avengers: Age of Ultron,” Downey Jr. hopes people just say, “Wow.” “I hope that they feel as good about this as they did when they came and saw the third ‘Iron Man,’ or as they did when they saw the most recent ‘Captain America’ and ‘Thor’ and that there’s still more to say and more to do and it’s fun. This movie is incredibly fun and thoughtful and has great themes and there’s a whole bunch of new people, so that’s my seal of approval,” concludes the actor.
Posted by LENS Blogger at 10:58 AM