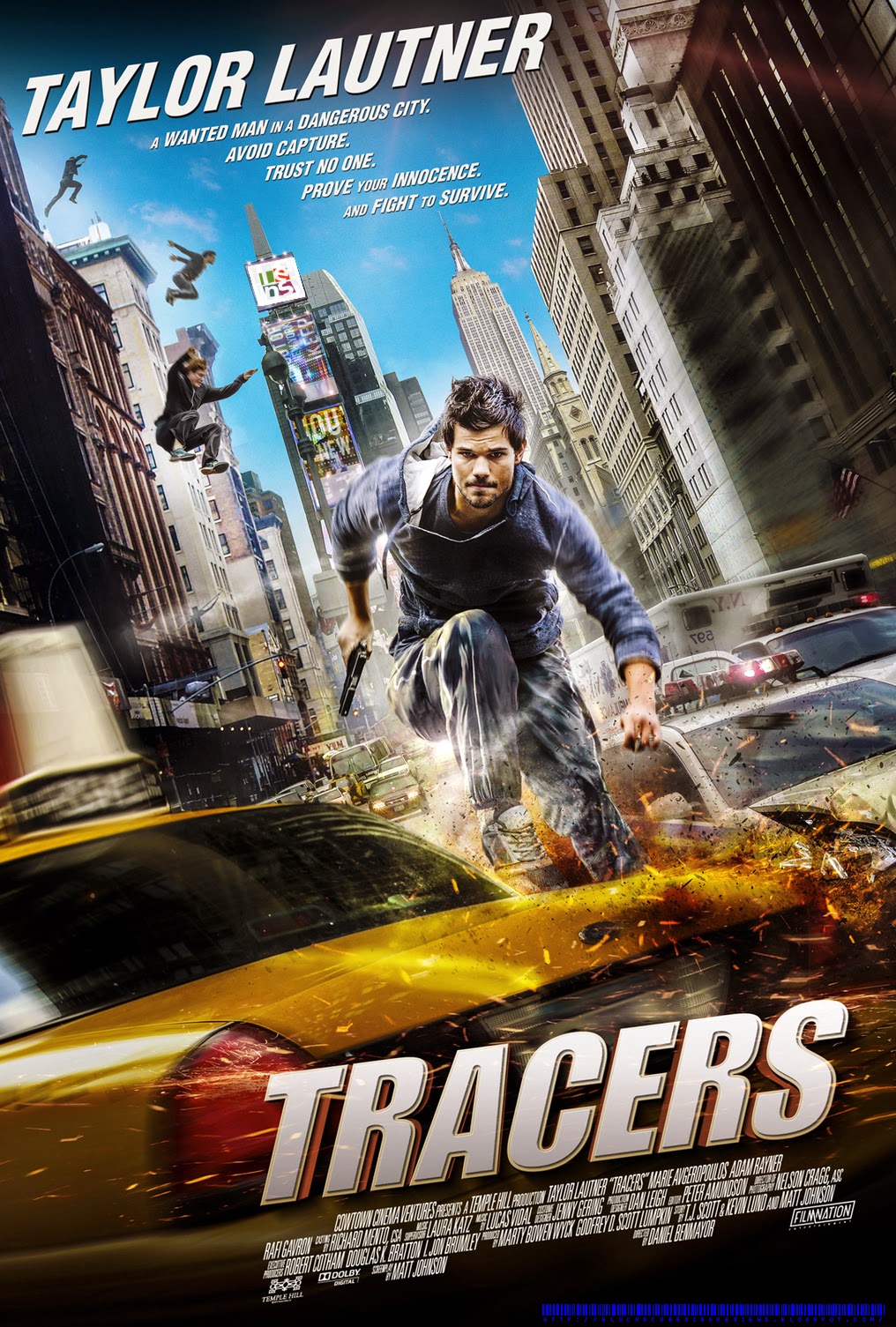 Lautner plays Cam, broke and depleted of luck trying to scrape off his debts, one day crashes into Nikki (Marie Avgeropoulos), a complicated stranger caught up in a gang of broken street criminals who seduces him into her dangerous world. The parkour takes him to places he has never been before and lands him a lucrative job under the gang’s leader, Miller (Rayner).  Ultimately extricating himself from a world unimagined and unanticipated becomes a whole different heart-stopping challenge.

Tracers is on its surface very simple.  It’s about a guy – ‘Cam’ – who finds a girl – ‘Nikki’. The girl allows him to reclaim a part of his life and a spirit in his life.  At the exact same moment that happens, outside forces are pressing in on him.  And that’s where Tracers takes off.

And for Tracers it was critical that the cast be as believable as possible.  “So for this film,” says producer Marty Bowen, “the real challenge was finding actors that we could believe could do this work.  The honest truth was, there was no other actor that could pull off the leading role of Cam better than Taylor Lautner.  And frankly, there are things that even his stuntman – his stunt double who taught him to do parkour, cannot do as well as Taylor can.  He’s just a truly gifted athlete.”  So Tracers is that perfect marriage of a great action drama that utilizes these highly tuned physical skills as a means through which things get done quickly, efficiently, and definitely differently than we’ve ever seen before in a film.  But the other extremely critical thing to note here is that Lautner is not only physically up to the challenges of the film, but concurrently he’s grown as an actor, and this role demanded real acting chops.”

“Tracers is a real Dickensian story in the vein of Oliver Twist about a young man who essentially has been orphaned; his father and mother are gone, and he’s been forced, at a very early age, to fend for himself.  So Cam dreams of getting his father’s old sport car up and running and moving far, far away,” says Bowen.

“Our story begins with Cam, a young bicycle messenger who, through a series of unfortunate circumstances, owes the wrong people money.  He is trying desperately to figure out how to get them the money quickly so that he can get his father’s car that he’s working on fixed and just leave town and start a new life.  But along the way he meets a girl and becomes besotted with Nikki and that changes his plans completely when she introduces him to a world that he didn’t know existed – the world of free-running, and in which he finds she and her street criminal friends and they become his new surrogate family of orphans.  But along with that, there’s the underside of things going on behind the scene that are very complicated; and what these new family members are doing, under Miller’s stranglehold on them, is clearly illegal. And before he realizes it, he’s in far deeper than he expected.  He realizes that in order to get out of this world, he’s got to do some drastic things,” says Bowen.

For Taylor Lautner, Tracers provided an opportunity for him to show the world that he’s an actor to be taken very seriously.  He’s emerged into a talented force on screen that not only can pull of the amazing demands of a fast-paced action thriller, and is equally facile at the more character-driven connective threads that keep Tracers as a whole a fast-paced, heart-stopping drama too.
Posted by LENS Blogger at 12:25 PM