STARS SHINE BRIGHT ON CINEMAWORLD
CinemaWorld is an international movie channel that unlocks a whole new world of entertainment beyond Hollywood.  Available in High-Definition for the utmost enjoyment, the channel showcases compelling, award-winning movies that are box-office hits in their countries of origin. The movies on CinemaWorld cross boundaries and cultures, featuring some of the world’s brightest talents.

This March, CinemaWorld shines the spotlight on young rising stars on the Sunday See The World movie slot.

Raoul Bova, a two-time Italian Golden Globes Best Actor winner and co-star in The Tourist (Johnny Depp and Angeline Jolie) and Rosabell Laurenti Sellers, a 17-year old with numerous TV shows and movies to her credit, are the leads in 2013 Italian Box-Office Hit Out of the Blue.  Andrea is a handsome, single and self-assured man with a skyrocketing career.  Everything in his life of one-night stands seems to be going well until one day, a teenager, who claims to be his daughter, knocks on his front door.  Guaranteed to win you over with its stellar cast, under the direction of Actor/Director/Writer Edoardo Leo. Catch Out of the Blue on March 9, at 9:00 PM.

Guido (played by Luca Marinelli, European Shooting Star 2013) and Antonia (played by Italian pop singer Thony) are a young couple with opposing characters and working schedules; he works a night job as a doorman in a hotel, and she works as an employee for a rental car service.  David di Donatello 2013 Award winner for Best Song, by Thony herself, as well as nominees for Best Actor and Best Actress, Every Blessed Day is the story of what happens to Guido and Antonia when they decide to have a child.  The Hollywood Reporter said, “…Exceptional performances from both charismatic leads bring poignancy and humor to a film that deals with a difficult, but all too common story….”  The jury of European Film Promotion 2013 said this of Luca Marinelli: “His hypnotic innocent look – a major and rare quality for an actor – illuminates Every Blessed Day where his acting is very understated and unlike anything else we have seen.”  Watch Every Blessed Day on March 16, at 9:00 PM. 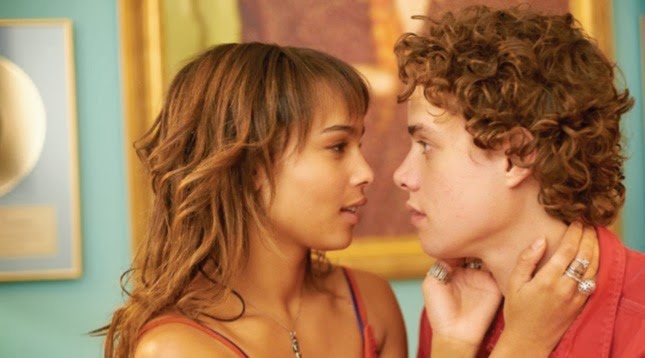 Mexican movie, The Boy Who Smells Like Fish, centers on Mica, a seemingly normal boy – until you go near him.  Mica deals with a disease, making him smell like fish.  No one wants to be his friend.  Life appears to be pointless – until Laura walks into it.  Douglas Smith, who was also in Percy Jackson: Sea of Monsters and HBO’s Big Love, plays the role of Mica, while Laura is played by Zoë Kravitz, daughter of Lenny Kravitz.  Catch the premiere of The Boy Who Smells Like Fish this March 23, at 9:00 PM.

Featuring a star-studded, award-winning cast, A Family is about a young woman, Ditte (played by Lene Maria Christensen), who finds her dream of moving to New York dashed when her father, Richard (played by Jesper Christensen), falls seriously ill.  Ditte is faced with the grueling decision; to pursue her own dreams, or to continue the legacy of her family.  This 2012 Danish Drama will premiere on CinemaWorld this March 2, at 9:00 PM.  While Rosa Morena, nominated for multiple awards (including Best Actor, Best Actress, Best Director and Best Film) at Denmark’s Oscar – the Robert Awards 2012, is a tale of longing.  Thomas (played by Anders Berthelsen), a gay architect, goes to Brazil hoping to adopt a child.  He soon finds himself at odds with the law, but then he meets a woman and their relationship evolves in unexpected ways.  Rosa Morena premieres on CinemaWorld this March 30, at 9:00 PM.

CinemaWorld is available in Metro Manila on Cable Link on channel 301, and on Sky Cable HD on channel 184.  Contact your cable operator for more details.
Posted by LENS Blogger at 7:56 PM