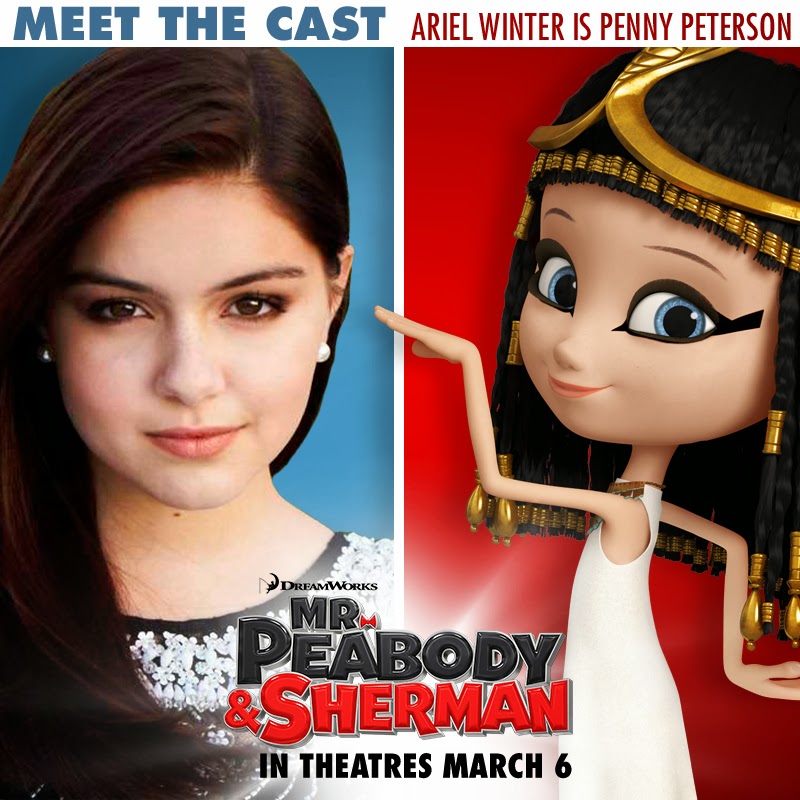 Mr. Peabody, the world’s most accomplished dog is parent to Sherman who uses his most ingenious invention, the WABAC machine, to hurtle back in time to experience world-changing events first-hand. But when Sherman breaks the rules of time travel along with his friend Penny (Ariel Winter), our two heroes find themselves in a race to repair history – and save the future.

From the animation dream team of DreamWorks and the director of blockbusters “The Lion King” and “Stuart Little,” director Rob Minkoff puts together a talented voice cast in “Mr. Peabody & Sherman” including Ty Burrell, Max Charles, Ariel Winter, Stephen Colbet, Leslie Mann, Patrick Warburton and Allison Janney.   The movie’s time travel is a compelling notion that lends an intriguing dimension to an exciting, adventure-filled story.  The film’s contemporary characters interact with equally entertaining famous figures from history – a dynamic that provides surprising fish out of water moments and myriad culture clashes.

Mr. Peabody and Sherman’s entrée to the infinite folds of history is a wondrous contraption called the WABAC, which is the singular creation of the world’s greatest inventor, Mr. Peabody.  The perspicacious pooch built the device so Sherman could experience history up close and personal.   Soon thereafter, Peabody, Sherman and Penny pay a visit to Peabody’s old friend and the original Renaissance Man, Leonard Da Vinci, portrayed, hilariously, by Academy Award nominee Stanley Tucci. Our trio finds the famed artist/scientist/engineer/inventor/scholar

Next to Mr. Peabody, the person who becomes closest to Sherman is his classmate Penny Peterson.  Penny is a double threat – cute and smart. Penny rules her elementary school until she encounters Sherman, who is even more of a “brain” than Penny is.  But her natural charisma and daring nature, as well as her caring and loyalty, draw her into a friendship with Sherman that truly stands the test of time.

“Initially, Penny is at odds with Sherman,” producer Schwartz explains.  “But we soon realize there’s a lot more to her, and as soon as she’s able to put aside her initial jealousy of Sherman, she begins to see that he’s a pretty interesting kid.  The great thing about Penny is that we really see her grow over the course of the movie.”

The character’s dynamism, smarts and fearlessness made it a tough part to cast – until Ariel Winter, who plays the teenage daughter of Ty Burrell’s Phil Dunphy in “Modern Family,” auditioned.  Minkoff, who was initially unaware of Winter’s connection to Burrell, says it was “a great coincidence that they came to work together on MR. PEABODY & SHERMAN.  Ariel brings tremendous energy to Penny.  She is a witty and wry teenager, and though Penny is younger [than the actress], Ariel brings some natural sparks and understanding of the character.”

But even with that o f any period’s danger, action, adventure and a dash through the Paris sewer system, the duo’s (and Penny’s) biggest time traveling adventures lie ahead.  A Sherman-Penny time traveling joyride takes them to Ancient Egypt, where Penny finds herself betrothed to a nine-year-old King Tut.

Travel through time in a wild ride with the trio when “Mr. Peabody & Sherman (3D)” opens March 6 nationwide, a DreamWorks Animation presentation from 20th Century Fox to be distributed by Warner Bros. (in Phils. Cinemas).
Posted by LENS Blogger at 3:51 AM

Email ThisBlogThis!Share to TwitterShare to FacebookShare to Pinterest
Labels: ariel winter in mr. peabody and sherman