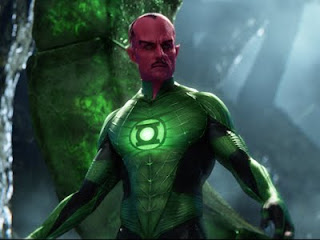 Audiences who are new to “Green Lantern” might not be aware that Hal Jordan (Ryan Reynolds) is only one of a force of thousands, all of whom have the title of Green Lantern.  Foremost among them is Thaal Sinestro, the leader of the Green Lantern Corps, played by British actor Mark Strong (“Sherlock Holmes,” “Robin Hood”).
In Warner Bros.' 3D action-adventure, Sinestro mourns the loss of fallen Lantern Abin Sur as strongly as he questions the choice of Hal to take his place; although, according to everything he knows, the ring that chooses a Green Lantern never makes a mistake.
Strong was drawn to the film’s thematic issues.  “I’m intrigued by the notion of the balance between fear and will.  This is a story about what you can achieve, and overcome, if you put your mind to it, and it’s told in a really dynamic, electrifying way.”
Sinestro is one of only two humanoid aliens portrayed by an actor, albeit under heavy prosthetic makeup.  “He’s a very hard task master, but it’s all done for the right reasons; he’s totally committed to the cause,” Strong justifies.  “He genuinely believes in the Corps and that they can keep peace in the universe.”
Part of Sinestro’s skepticism with regard to Hal’s capabilities stems from his feelings about the human race, which he deems too young, arrogant and unexceptional to be part of the Corps.  “He doesn’t think humans are worthy, so he is extremely dismissive of Hal, thinking him bound to be the weak link.  Of course, a lot of those feelings exist because he doesn’t think Hal can ever live up to the memory of his former colleague, mentor and friend, Abin Sur.”
“Mark Strong brought so much gravitas to the role of Sinestro,” producer Donald De Line says.  “Every time the camera rolled, he had great presence and commanded total attention and respect, which is precisely what was called for.”
Mark Strong will next lend his voice to Pixar’s “John Carter of Mars,” set for release next year.
Among Strong’s previous film credits are Kevin MacDonald’s Roman epic “The Eagle,” Peter Weir’s fact-based drama “The Way Back,” with Colin Farrell; Ridley Scott’s “Robin Hood,” and “Body of Lies”; Matthew Vaughn’s “Kick-Ass” and “Stardust”; Guy Ritchie’s “Sherlock Holmes,“ “RocknRolla,” and “Revolver”; “The Young Victoria,” opposite Emily Blunt; Pete Travis’ Apartheid drama “Endgame”; “Good,” with Viggo Mortensen; “Miss Pettigrew Lives for a Day”; Stephen Gaghan’s “Syriana”; Roman Polanski’s “Oliver Twist”; and “Fever Pitch,” with Colin Firth.
Opening across the Philippines on June 16 in 3D, 2D and regular format,  “Green Lantern” will be distributed worldwide by Warner Bros. Pictures, a Warner Bros. Entertainment Company.
Posted by LENS Blogger at 7:27 PM