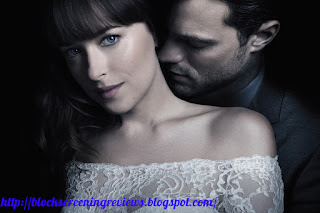 In the film, believing they have left behind shadowy figures from their past, newlyweds Christian (Jamie Dornan) and Ana fully embrace an inextricable connection and shared life of luxury. But just as she steps into her role as Mrs. Grey and he relaxes into an unfamiliar stability, new threats could jeopardize their happy ending before it even begins.

For her third time as Anastasia Steele, Johnson dove headfirst into Ana’s challenging world and emboldened sense of self. She updates us with where the characters are: “In Freed, there’s more suspense, more of a thriller aspect, with additional characters and more action—all of that is intertwined with the love story. A love story that has evolved and deepened. Anastasia and Christian are married, and Anastasia has received a promotion, raising the intensity of both her private and professional life.”

She agrees with E L James and screenwriter Niall Leonard, though, when she states: “This is an epic love story but we do our best to keep it grounded and relatable. It’s one of those inexplicable connections between two people that is completely undeniable. Throughout these stories, you find the protagonists faced with situations that require one or both of them to bend their wills and adapt to their version of love.”

When it came to working with Johnson and Dornan, director James Foley takes a moment to reflect on the work they have put into the series. “Jamie and Dakota have the kind of instinctual connection to their characters that actors who are really good in their parts find. At this point, they are referencing something that they know; they’re not making believe. Somehow, Dakota plugged into the psychology and the emotion of Ana, and Jamie relaxes even further into the role; in Freed, you see him find Christian Grey in himself.”