Academy-Award winner Daniel Day-Lewis (“My Left Foot,” “There Will Be Blood”) is also this year’s Academy-award nominee frontrunner for his titular role in the Steven Spielberg-directed movie “Lincoln.” 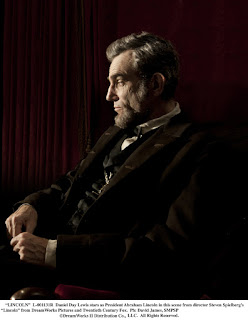 Daniel Day-Lewis stars in Steven Spielberg’s powerful drama, “Lincoln,” which focuses on the last four months in the life of the 16th President of the United States. During this pivotal period, Abraham Lincoln abolished slavery and ended the Civil War that had ravaged the country and taken an estimated 750,000 lives. With an astonishing performance from Day-Lewis and masterful direction by Spielberg, a portrait emerges of a political genius who was also a moral visionary and a warm, compassionate man.

Daniel Day-Lewis plays Abraham Lincoln, the far-sighted American president known as ‘The Great Emancipator’ and widely regarded as the most influential statesman of the 19th century.  Lincoln is determined to free the slaves, even if it means prolonging the Civil War and Steven Spielberg’s momentous new film delivers fresh and fascinating insights into the brilliant leader, explaining how the path to emancipation was fraught with complexity.

“Lincoln” explains how the President engages in backroom deals, patronage and political machinations in order to secure the passage of the all-important 13th Amendment to the Constitution of the United States, the measure that officially ended the evils of human bondage. He directs the war effort toward the destruction of slavery with insight and political mastery, deliberately prolonging the war and delaying peace negotiations as he tries to build a bipartisan consensus in the House of Representatives.

Bearing a remarkable resemblance to the 16th President, Daniel Day-Lewis gives a wonderfully measured and nuanced performance as Lincoln. With his impassioned portrayal of abolitionist Thaddeus Stevens, Tommy Lee Jones offers up the performance of a lifetime. Sally Field is equally impressive as Lincoln’s highly intelligent but troubled wife, Mary Todd Lincoln. William Seward, Lincoln’s former rival who becomes the President’s greatest supporter, is masterfully played by David Strathairn. The formidably talented cast includes Joseph Gordon Levitt, James Spader, Hal Holbrook, John Hawkes, Jackie Earle Haley, Bruce McGill, Tim Blake Nelson, Joseph Cross, Jared Harris and Lee Pace.
Like many people, Day-Lewis was initially familiar with Lincoln only in broad strokes, mostly through speeches like The Gettysburg Address. “But as a human being, I had little sense of him whatsoever until I began to learn,” he says.  The screenplay kicked off the learning process. “In a very rich way, (screenwriter) Tony suggested the man through his intellect, his humor and his melancholy, both domestically and in office. The contrast between those two things is something that’s like food and drink to me. In Tony’s script you see a man in that strange paradox of being both public and private.”

He then undertook an intimate engagement with “Team of Rivals” from which the movie was in part based as well as many other writings about and by Lincoln. But this gave way to something more organic.  “Doris’ book was a great beginning,” Day-Lewis says.  Another key to Lincoln became what Day-Lewis calls “the rhythm of the man.” He explains:  “He did everything at his own pace and could only do it at his own pace. He needed to arrive at his decisive conclusions by a logical process that he relied on. What looked to others like inaction or paralysis was just the physical impression that he gave.  In his own mind he was traveling as he needed to do, through each step of the process, after which he could see things clearly.”

Indeed, production designer Rick Carter recalls a feeling of tumbling through time when Day-Lewis first came to the set:  “I haven’t gotten over the first time I saw him,” muses Carter. “Daniel Day-Lewis was not who I saw in front of me. I saw the man who was the President of the United States in 1865. I saw Abraham Lincoln. I didn’t see any distinction or gap between them.”

“Lincoln” opens February 20 in theaters from 20th Century Fox and DreamWorks Pictures to be distributed by Warner Bros.
Posted by LENS Blogger at 5:34 PM

Email ThisBlogThis!Share to TwitterShare to FacebookShare to Pinterest
Labels: daniel day-lewis as lincoln