PLANET OF THE APES RISING 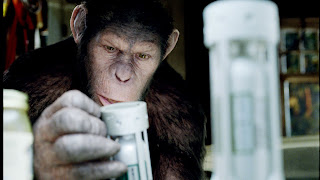 A new social order is about to take place, threatening humans in the event-movie “Rise of the Planet of the Apes” starring James Franco (127 Hours), Freida Pinto (Slumdog Millionaire) and Tom Felton (Harry Potter).
Orchestrated by director Rupert Wyatt and Peter Jackson’s filmmaking empire Weta Digital, “Rise of the Planet of the Apes” breaks anew new grounds in moviemaking history using photorealistic apes instead of actors in costumes exposed to natural setting.  Pushing the boundaries beyond movie making techniques used in James Cameron’s “Avatar,” the movie is a completely new take on 20th Century Fox’s most beloved and successful franchises.  Owing much of its genesis to Avatar, “Rise of the Planet of the Apes” for the first time uses technology that allows audiences to emotionally engage with a lead character, a chimpanzee named Caesar (portrayed by Andy Serkis, ’Lord of the Rings’ trilogy’s Gollum), who does not actually exist.
James Franco plays Will Rodman caught in the middle of an epic battle where the upended destinies of man and primate meet.  As a scientist working within a large pharmaceutical corporation, Gen-Sys, conducting generic research to develop a benign virus that restores damaged human brain tissue, Will is committed to finding a cure for Alzheimer’s disease that afflicts his father, Charles (John Lithgow). When Will’s research test subjects suddenly display bizarrely aggressive behavior, the company shuts down his program.
Will finds himself charged with an overlooked newborn male chimpanzee most promising of his test subjects destined for greatness named Caesar.  Will secretly raises young Caesar as his own, at home, while caring for his ailing father.  As the story progresses, he becomes more of a person and less of a scientist.  This in turn leads Will to Caroline (Pinto), a primatologist who serves as Caesar’s vet, and who becomes a key player in both their lives.
“Rise of the Planet of the Apes is about our civilization reaching a point of no return,” says director Rupert Wyatt.  “Events unfold through the eyes of Caesar, a super-intelligent chimpanzee who at a young age sees humans as being capable of wonderful things, like art and reason. And then he begins to see humanity’s dark side – oppression, bigotry, and the ostracizing of what and who we don’t understand. Another key theme is humanity’s hubris – our arrogance in thinking that we can twist, push, cheat, or circumvent the laws of nature, without consequences. The movie pits humans against nature – and against themselves – leading to a resolution that sees humans and apes on the path that will take them to a new and shocking world order.”
“The film taps into our most primal fear of the Alpha of our planet being usurped – literally letting another species take over the world – and asks how would that play out,” concludes Rupert Wyatt.
“Rise of the Planet of the Apes” shows in more than 100 screens across the Philippines from 20th Century Fox to be distributed by Warner Bros.
Posted by LENS Blogger at 8:17 PM

Email ThisBlogThis!Share to TwitterShare to FacebookShare to Pinterest
Labels: rise of the planet of the apes