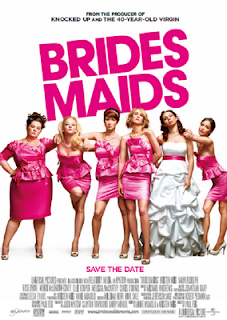 Story: Kristen Wiig leads the cast as Annie, a maid of honor whose life unravels as she leads her best friend, Lillian (Maya Rudolph), and a group of colorful bridesmaids (Rose Byrne, Melissa McCarthy, Wendi McLendon-Covey and Ellie Kemper) on a wild ride down the road to matrimony.

A new comedy from the producer that brought you Knock Up and The 40-year-old Virgin, Judd Apatow. I never got to see a trailer of this movie so when I first saw the poster, I thought it was a chick flick because the women were dominant characters in the poster. I was proved wrong when I watched it. Just like the two earlier works, there were similarities. One: the main character is missing something relevant in his/her social status, Two: A problem in relationships, Three: An odd circle of friends.
The humor in the movie is adult-oriented and slapstick. Despite the comedy will make you die laughing, there are also serious moments because there are also lessons about reconciling  old friendships while making new ones and dealing with people you don't want to have anything to do with.
For the casting, Kristen Wiig, who plays Annie, is a revelation of comedy. She is partially like a female version of Jim Carrey. She can somehow manipulate her expressions that looks so comical and alter her body movements. Maya Rudolph is also no stranger to comedy. I remember Melissa McCarthy playing Sookie in Gilmore Girls she was a great comedian. I never thought she could do character acting like what she did in the movie.Rose Byrne diverted from her character in Marvel's X-men: First Class to a more partially antagonistic comic role. Wendi McLeddon-Covey and Ellie Kemper also had contributed comic situations in the movie but not as influential as the other four actress.
In my opinion, if there's one movie I want to see that opens this week, this is that kind of movie. The movie was also co-written by Kristen Wiig which which is why she can relate to her character and is directed by Paul Feig. Bridesmaids opens July 20 exclusively in SM Cinemas and is distributed by Solar Entertainment, Corp. The movie is rated R-13.
Posted by LENS Blogger at 7:57 PM

Email ThisBlogThis!Share to TwitterShare to FacebookShare to Pinterest
Labels: bridesmaids