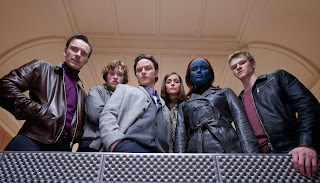 Before Charles (James McAvoy) and Erik (Michael Fassbender) took the names Professor X and Magneto, they were two young men discovering their powers.  “X-Men: First Class” brings together the epic scale and action of a summer blockbuster with a character-driven story that unveils the beginning of the X-Men saga.  As the first class discovers, harnesses, and comes to terms with their formidable powers, alliances are formed that will shape the eternal war between the heroes and villains of the X-Men universe.
After Charles, joined by Erik, recruits the “first class” of young mutants, these gifted students learn to control and direct their powers for the greater good of mankind. But harnessing these powers is not easy, nor is their coming together as a team.
In the first X-Men film trilogy, the mutants have long honed their abilities and were a smooth-running (well, mostly) team. But when we meet the young mutants in “X-Men: First Class,” their powers are untamed and unfocused.  Moreover, says screenwriter Bryan Singer, like most teenagers, the mutants are uncomfortable with being different from their peers.  “Their situation is a metaphor for how uncomfortable teens feel in their skin, and how difficult it is when you’re ‘different’ from the societal ideal.”
Charles’ first mutant ally is Raven, a blue-skinned shape-shifter with superhuman agility.  The two mutants had met as youngsters, when Charles discovered Raven rummaging through the kitchen of his family’s mansion.  Charles makes Raven a member of his family, and they grow up as a kind of brother and sister.  But as we know from the first films, their relationship will change dramatically.  Explains Bryan Singer:  “Because Charles is young and at times naïve, he sometimes doesn’t pay as much attention to Raven as he should, and she sometimes becomes resentful.  And that takes her on the path to where we find her in the original film trilogy [played by Rebecca Romijn], as part of Magneto’s Brotherhood.”
Jennifer Lawrence, a Best Actress Academy Award® nominee for her breakout performance in the 2010 drama “Winter’s Bone,” portrays Raven, whose mutant name is Mystique. “Raven has learned to live with her secret, but much like most insecure teenagers who react to something they perceive makes them different, she hasn’t really faced up to her unique abilities,” she says. “Raven is mostly ashamed of them. She slowly starts to realize it is a blessing and becomes proud of her mutant abilities, as do the other young mutants of their powers.  At the beginning we are isolated and alone, and each mutant goes through a huge evolution.  We join together to become this iconic X-Men team, and then separate.  It is fascinating to see the journey each character takes and which side they ultimately join.”
As Charles and Erik become aware of the existence of other mutants, they discover a plot that puts them in the middle of the escalating tensions between the U.S. and the Soviet Union, which is hurtling the world toward disaster. This, in turn, creates an uneasy alliance between the mutants and a covert U.S. government agency.  At the agency, Charles and Erik meet Hank, a brilliant scientist with only a few mutant features – until a serum unexpectedly unleashes the superhuman Beast within.
Hank, his mutant powers as yet unrevealed, works at the top-secret agency developing world-changing technology, like Cerebro and the X-Jet. Hank has been alone for much of his life, in hiding and embarrassed by his big simian-like feet and superhuman agility. When he meets Charles and Erik, Hank’s life takes an unexpected turn.  Explains Nicholas Hoult, a rising star who takes on the role of the mutant whom fans would come to love as Beast: “Charles tells Hank he must release his full mutant powers.  Hank has been trying to suppress his powers and convince himself they don’t even exist. He is too afraid of what he might be capable of if he unleashes them. Charles makes Hank confront his mutant abilities, learn to control them, and use them to help both mutants and humans.”
Hoult understands how Hank’s feelings about his unique abilities are so relatable:  “Everyone has been embarrassed or felt like an outsider, at some time in their life.  The feelings these mutants have about their powers are no different.  When they find each other, and can share their talents, they can finally be proud of who they are.”
Rounding out the team that become the first class of X-Men are Lucas Till as Alex Summers, aka Havok, who can emit concentric rings of super-heated energy waves, causing his targets to burst into flame – and whom Charles and Erik free from solitary confinement in a penitentiary; Caleb Landry Jones as Sean Cassidy, aka Banshee, whose unique sonic blasts carry him into flight; and Edi Gathegi as Armondo Munoz, aka Darwin, whose "reactive evolution” enables him to adapt to any situation or environment.
“X-Men: First Class” opens June 2 (Thursday) in Phil. theaters from 20th Century Fox to be distributed by Warner Bros. Visit  20th Century Fox (Philippines) on Facebook and on www.youtube.com/20thcenturyfoxph for promos and latest clips.
Posted by LENS Blogger at 6:58 PM