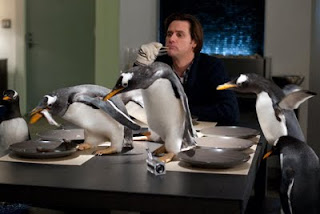 Jim Carrey stars anew at his comic best in the hilarious and heartfelt family film “Mr. Popper’s Penguins” based on the beloved children’s book of the same title by Richard and Florence Atwater.  Carrey plays Thom Popper, a workaholic New York businessman who has neglected the woman he loves and his children, in order to pursue his real estate career with a relentless drive.  His life is suddenly and dramatically turned around when six penguins are delivered to his apartment and he is forced to become their full-time caretaker. They are undeniably cute but inevitably cause chaos, gradually showing him what is really important in life. Directed by Mark Waters, the wonderful supporting cast includes the legendary Angela Lansbury, Carla Gugino …and six Gentoo penguins.
Carrey’s character Thom is divorced from the woman he still loves (played by Carla Gugino), he does not make time for his two children and has lost touch with everything that is precious in life. Mr. Popper has sacrificed his family for his career. We discover that as a child he never got the chance to form a close relationship with his own dad, who preferred traveling around the globe having adventures to staying at home and building a bond with his son. An inherently good guy, Mr. Popper has become consumed with work and is remarkably self-centered. Everything changes when he inherits six Gentoo penguins from his estranged father. Initially horrified, he gradually befriends the beautiful Antarctic birds as he is compelled to care for them.  The penguins waste no time in creating total havoc and in the process, turn his life upside down as they slowly turn his pristine and swanky New York apartment into a chilly winter wonderland. Inevitably, the pesky penguins require his constant attention and make it impossible for Mr. Popper to conduct business with his previous level of relentless focus and drive.  As he finds life both at work and at home rapidly unraveling, he also begins to learn the value of family.
“Mr. Popper’s Penguins” will open in Phil. cinemas on June 17 from 20th Century Fox. Visit  20th Century Fox (Philippines) on Facebook and on www.youtube.com/20thcenturyfoxph for promos and latest clips.
Posted by LENS Blogger at 7:21 PM