When retired Petty Officer First Class Marcus Luttrell and Patrick Robinson’s book Lone Survivor: The Eyewitness Account of Operation Redwing and the Lost Heroes of SEAL Team 10 was published in 2007, it quickly rose to the top of The New York Times nonfiction best-seller list. 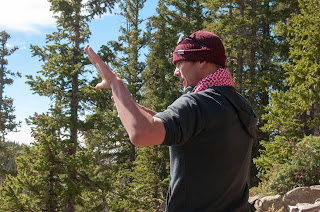 This true story of duty and honor in the face of extreme adversity and the heroic deeds of fallen comrades caught filmmaker Peter Berg’s attention when his production partner, Film 44’s Sarah Aubrey, gave him a copy of the book and insisted that he read it. Although in production on his then-upcoming blockbuster “Hancock,” Berg began to flip through it during a lunch break. After a few minutes, he was transfixed, locking the door to his trailer and reading the book cover to cover. Determined to win the rights and adapt “Lone Survivor” into a film, Berg became a man obsessed.

Berg offers: “When I first read Marcus’ book, what got me the most was the dilemma that these men faced: being compromised by three goat farmers and knowing that if they let them go, there was a very good chance they were going to get into a dangerous gunfight with a lot of guys.”

Inevitably, the SEALs’ journey struck the themes that the director has returned to over and over again in his projects. Says the writer/director: “This story is about working together for something bigger than our ego, bigger than our individuality. It’s about coming together as a group—protecting each other, loving each other, looking out for each other—and finding a greater strength as a team than you could ever find as an individual. Marcus wrote a book that, as much as it’s about 19 people being killed on a tragic day in Afghanistan, is about brotherhood, sacrifice and team commitment.”

Berg and Aubrey reached out to Luttrell to discuss the possibility of adapting the SEALs’ story into a film. Luttrell appreciated the filmmaker’s military-like attention to detail and guerilla-style of filmmaking and insisted to Berg that he would only grant him rights to the story if Berg truly respected and honored his brothers’ sacrifice. Indeed, Luttrell hoped that audiences around the world would begin to understand the decisions made on that mountain. After a bonding experience over many beers, and a not-so-thinly-veiled threat that Berg would have to answer to more than 1,000 SEALs if the director messed up the interpretation, Luttrell was on board.

The former SEAL discusses why he chose Berg: “There were so many directors and studios that came in and wanted to make the movie, and I interviewed with all of them. But when I saw Pete and talked to him, he’s the one that I got that certain feeling about. He was the one I thought could get it done.” Luttrell was impressed by the filmmaker’s dedication. “Pete went above and beyond. He’s done all his homework, studied it for years to get this right, and it paid off. You can tell somebody who puts the work in and you can tell somebody who didn’t. He did, and I love him for it. He’s a good man, and it’s a privilege to have him in my life.”
While Luttrell’s book is a chronicle of many events, including his 1999 enlistment and training prior to his mission in 2005, Berg realized that the screen adaptation would need to concentrate on the more dramatic tale that unfolded once Luttrell was deployed to Afghanistan. His focus for the screenplay became the unbreakable camaraderie of the team members, their valor under fire and the tragic turn that forever changed the life of sniper, hospital corpsman and SEAL Luttrell.
While Berg knew that there would be significant pressure to get their story just right, he couldn’t anticipate the depths to which he would become emotionally involved in the lives of these elite warriors and their relatives. He pauses: “There was pressure from the families, the SEAL community, and then Marcus—whether I liked it or not—announced that he was moving into my house for a month. He was going to make sure I understood what happened on that mountain.”
Just as they were about to cast the film and begin production, Berg was given more pressure than he had expected. Luttrell recalls: “I felt so sorry for Pete because he got it so bad from every team guy, from every widow. We just kept saying, ‘Don’t mess this up.’ But I think that’s also something that fueled him. That’s why the movie is great and why people are responding to it so strongly, because he put 110 percent into it…probably because he knew his life was on the line.”
Opening across the Philippines on Jan. 8, 2014, “Lone Survivor” is distributed by Walt Disney Studios Motion Pictures International.
Posted by LENS Blogger at 3:46 AM