Michelle Pfeiffer in The Family


Michelle Pfeiffer is a Golden Globe Award winner and three time Academy Award nominee who over the last three decades has captivated film audiences with her stunning beauty and compelling performances. 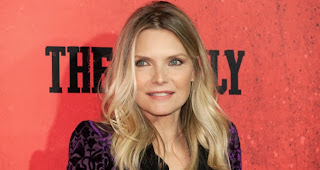 Most recently, Pfeiffer was seen in Dark Shadows, a film that reunited her with Tim Burton for a big-screen take on the gothic vampire series from the 1960s. She also appeared in Alex Kurtzman‟s drama People like Us, opposite Chris Pine, Olivia Wilde and Elizabeth Banks, and Garry Marshall‟s romantic comedy New Year’s Eve, alongside Robert De Niro, Hilary Swank, Sarah Jessica Parker and Ashton Kutcher.

This year she is starring opposite Robert De Niro in the film "The Family," Pfeiffer plays the wife of De Niro, who plays a Brooklyn mobster. Their family has been forced to move to Normandy, France, under the witness protection program.

“Michelle Pfeiffer was Luc‟s first choice to play Maggie Blake. She agreed to do the film very quickly because the story is so appealing and so was the idea of working with Luc and Robert.”

Although De Niro and Pfeiffer both starred in the films  Stardust and New Year’s Eve, they had never actually appeared in a scene together. Still, De Niro says he felt very comfortable working with her. “I figured it was a good match for us,” he says. “I‟m very happy that Michelle was available and wanted to do this.”

Pfeiffer came in to meet with Besson full of ideas on how to make the character richer and more rounded. “Michelle is very focused,” says the director. “Pairing her with an actor of the caliber of Robert De Niro brought out the best in each of them. They had not shot together before, so they really wanted to show each other that they could be counted on. It was just a pleasure for me, because they respect each other so much. They‟re great team players.”

Pfeiffer says she came to the set looking forward to working with De Niro and was not disappointed. “He‟s such an icon,” she says. “There are maybe five actors that have godlike status for me, and he‟s one of them. He is very humble, very quiet and collaborative, and he has a generous spirit. I really enjoyed being on the set with him and with Luc Besson.”

The actress, who starred in Jonathan Demme‟s 1988 Mafia comedy Married to the Mob, admits she has a fondness for playing gangster‟s wives, but the real attraction for her was the Manzoni-Blake family dynamic. “They take a genre that I love in a new direction. This is really about how they interact with each other and the outside world, which is a great source of humor in the film. They are their own worst enemies and impossible to protect because they just can‟t behave. It‟s really about the family connection and that overrules all, no matter the circumstances.”

Maggie is the bedrock of the family, according to Pfeiffer. “She does have a temper, but she always hits the ground running and tries to make the best of the situation to keep her family‟s spirits up. She has accepted that this is now their way of life, but she still has some issues and her rage has got to come out somewhere. She‟s humiliated by the whole experience, especially the anti-American sentiment that they keep encountering in France. She tries to fit in, to do good and to respect the culture that she‟s in, but she feels she is being treated unfairly.”

Pfeiffer enjoyed working on Besson‟s warp-speed schedule, even though it was occasionally challenging. “I like that,” says Pfeiffer. “You constantly have to be on your toes. At the same time, it lends a really good energy to the film. Luc is constantly thinking, which I love. He‟s collaborative, but I knew that my ideas had to be very well thought out, because he doesn‟t waste time on debating anything that he thinks won‟t work.”

“THE FAMILY’ is released and distributed by CAPTIVE CINEMA
Posted by LENS Blogger at 8:56 PM

Email ThisBlogThis!Share to TwitterShare to FacebookShare to Pinterest
Labels: michelle pfeiffer in the family