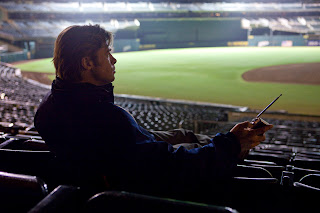 The New York Film Ciritics Circle (NYFC) has just chosen Brad Pitt as this year's Best Actor for his soul-searching performance in Columbia Pictures' baseball drama, “Moneyball.”  The award catapults Pitt as a veritable contender for more  acting trophies come awards season this coming February.
In his review of the film, critic Richard Corliss of Time Magazine, writes “Brad Pitt does sensational work...he exudes pure movie-star authority...His performance is a canny portrait of leadership — part genius, part crazy guts, part dumb luck — and worthy of moving Pitt up to the playoff round of Oscar finalists for Best Actor. We'd put money on it.”
The NYFC also gave Best Screenplay honors to writers Aaron Sorkin (“The Social Network”) and Steven Zaillian (“Schindler's List”) for their work on “Moneyball” which they adapted from the non-fiction book by Michael Lewis.
“Moneyball” is based on the true story of Billy Beane (Pitt) – once a would-be baseball superstar who, stung by the failure to live up to expectations on the field, turned his fiercely competitive nature to management.
Manohla Dargis of The New York Times is all-praises for the actor, writing “Brad Pitt gives the quintessential Brad Pitt performance.  It’s hard to imagine anyone but him in the role. He’s relaxed yet edgy and sometimes unsettling, bristling with tamped-down fury...”
Owen Gleiberman, Entertainment Weekly, describes Pitt as an actor who “has aged like a fine wine...beneath his funny, exhilarating, tossed-off strut of a performance, he gives Billy a deep river of self-doubt, as well as a need to prove himself that never quite comes out and shows itself.”
Finally, Kenneth Turan of Los Angeles Times, affirms “Pitt does wonders with a role of a good guy in a tough space, a man who combines the confidence and charisma of the former professional athlete but with an unexpected questioning nature. This is low-key star power at its best.”
Opening soon across the Philippines, “Moneyball” is distributed by Columbia Pictures, local office of Sony Pictures Releasing International.  Visit http://www.columbiapictures.com.ph for trailers, exclusive content and free downloads.  Like us at www.Facebook.com/ColumbiaPicturesPH and join our fan contests.
Posted by LENS Blogger at 11:30 PM