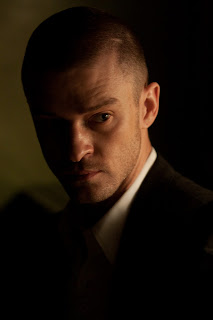 Multi-talented Justin Timberlake debuts in his starring role as Will Salas in the gripping action-thriller “In Time” opposite Amanda Seyfried.  Under the direction of genre-bender director Niccol Andrew whose works include “Gattaca” that introduced the unthinkable in genetic engineering and “The Truman Show” that sparked today’s reality shows, “In Time” advances to a near future where time is literally at arm’s reach.
Justin Timberlake’s Will Salas struggles every second of every day and is  is constantly on the run, fighting to get more time. While people stop ageing at the age of 25 in the movie,  life beyond that point is precarious, at least for the poor like Will and his mother, Rachel (played by Olivia Wilde who looks the same age as her son). They are only given a year’s grace, after 25, that it is a battle for survival which means that every moment is precious.
The rich at the other end of the spectrum have excessive amounts of time and they are effectively immortal. They have a decadently indulgent lifestyle where little is achieved because there is no sense of urgency.  It’s an unjust society implemented as a way of stemming over population.
When Will ‘inherits’ a lot of time from a wealthy man who wants to give it all away., he crosses all borders to get the zone where the rich lives.  He then  meets Sylvia (Amanda Seyfried), a beautiful but bored and over-protected heiress in the rich zone and takes her hostage.  Together on the run, Will and Sylvia try to put an end to the corruption and redistribute time.
Being a longtime fan of action thrillers, Timberlake immediately jumped at the chance to play the ‘old soul’ Will.  “When I was a kid, some of my favorite movies were action pieces like First Blood, The Fugitive, and Die Hard,” says Timberlake. “The one thing I loved about those specific movies was that the protagonists were everyday people placed into extraordinary circumstances and doing extraordinary things.”
Timberlake adds, “Will’s heroics are triggered by an easily relatable factor.  Will has grown up with essentially nothing. He wakes up every day and goes to work to stay alive.  Through a series of events, he decides that he’s not going to take it anymore, and takes it upon himself to try and change the way things work in this world.”
“Will grows up in Dayton, which is somewhat of a ghetto.  It’s kind of ironic that the word ‘day’ is in its name, because most of the citizens only walk around with a day to live.  So the day-to-day life in Dayton is quick.  People don’t have time to walk slowly, so they run, almost all of the time, to where they are going, and they’re constantly eating and drinking on the run.  They don’t have time to spare or to waste.  Everything’s frenetic and alive, in a kind of dangerous yet beautiful way.  When your back is up against the wall and you don’t have a choice, you make revisions and you live your life the way that it has to be, to survive.”
Ironically, having had an unconventional childhood due to his early success in the music industry, Timberlake has come of age and is much comfortable as he was than his younger years. ““I am happy about getting older. I like myself much more at 30 than I did when I was 25. You accept things more and you become more patient. I have been really lucky; I have made the most of my luck and I am happy about that.  I think the idea of immortality is actually frightening to me especially because I look back at my younger days as a lot of visual mishaps. I don’t know what I would do if I possessed immortality.  It’s definitely a mind trip getting into the idea that it could exist as we see it in the film. My character Will is always moving, always running and it’s mostly because he literally lives day to day.  I think I’ve probably spent time moving at a fast pace, so I identify with that.”
“In Time” opens October 28 in theaters from 20th Century Fox to be distributed by Warner Bros.
Posted by LENS Blogger at 10:45 PM

Email ThisBlogThis!Share to TwitterShare to FacebookShare to Pinterest
Labels: in time, justine timberlake