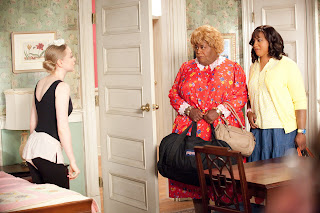 Martin Lawrence is back as undercover agent Malcolm Turner aka Big Momma in the action-comedy “Big Momma’s: Like Father, Like Son” with Brandon T. Jackson who appeared in standout roles in “Tropic Thunder” and “Percy Jackson.”  This time, Turner is joined by his teenage stepson Trent (Jackson) as they go undercover at an all-girls performing arts school after Trent witnesses a murder.  Posing as Big Momma and as hefty coed Charmaine, they must find the killer before he finds them.
Lawrence talks about in the following Q&A his 3rd time donning the fat suit as Big Momma and his upcoming projects.
Q:         What pulled you in to make a third Big Momma’s film?
A:         “Big Momma resonated with all audiences of all ages, no matter where they lived. I think everybody knows a Big Momma.  She might not look like the character I play, but everyone has a sister or aunt or grandma who keeps it honest and has a really loving heart.  And those are the things I love about Big Momma.   I love playing Big Momma, but it was really the energy of the script and having Brandon as my partner in the story that brought me back.  Malcolm looks at Trent as a son but Trent is becoming a man and wants to do his own thing.  Everyone can relate to that.”
Q:         Can you tell us about the movie’s latest plot?
A:         “The success of the first two “Big Momma” films led to this third offering, but we wanted the new film to reinvent the franchise, and not merely continue a successful formula.  So we opened the film up to an audience largely untapped by “Big Momma’s House” and “Big Momma’s House 2”: teens. Lawrence’s Malcolm/Big Momma now has an unexpected partner – his stepson Trent.  The action is set in an equally surprising setting: an all girls’ high school, and several music and dance sequences feature Lawrence, Jackson, and a talented ensemble of bright young stars.”
Q:         After all these years of playing Big Momma, what have you learned about women that you didn’t know before?
A:         There’s a lot of maintenance. It’s not as easy to get into all that stuff. Women love to impress and be their best, so its work, but it’s all worth it when it comes together.
Q:         How does it feel putting up the fat suit again and putting on the makeup?
A:         “I can’t say that I look forward to getting into it, but it’s my job. It’s what I do. When it used to take three hours, which used to just drive me crazy. But, we have a good make-up guy, who got it down to an hour and a half. Every morning, I was able to just calm myself and go through the process. But, when it took three hours, I just wanted to lose it”
Q:         After this, are there any other projects you’re into?
A:         Things are in the works. We’ve talked about Bad Boys 3. We’ve talked about me and Jamie Foxx doing a movie called The Skank Robbers, which takes the characters from Martin, Sheneneh and Wanda, and puts them together. They’re trying to work that script out.
Martin Lawrence’s string of starring roles in hit movies such as “Big Momma's House”  “Big Momma’s House 2,” “Bad Boys” “Bad Boys 2,” “Blue Streak” and “National Security” made him one of America's most popular actor/comedians.  His other screen credits include “Do the Right Thing,” “Talkin' Dirty After Dark,” “House Party,” “House Party 2,” “Boomerang,” “A Thin Line Between Love and Hate” (which he also co-wrote and directed), “Nothing to Lose,” “Life,” “What's the Worst That Could Happen?” and “Black Knight,” among others.
Lawrence began his career as a stand-up comedian gaining major attention at Hollywood's legendary Improv, and shortly thereafter won a performance spot on the popular talent showcase “Star Search.” and continued to star in sitcoms "What's Happening Now!" and “Def Comedy Jam.” He further went on to co-create executive produce and star in Fox Television's "Martin." The hit sitcom, which ran from 1992-1997 and earned three NAACP Image Awards.
“Big Momma’s: Like Father, Like Son” opens April 13 in theaters from 20th Century Fox to be distributed by Warner Bros.
Posted by LENS Blogger at 5:54 PM